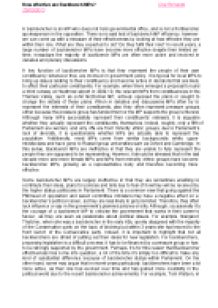 How effective are backbencher MPs?

ï»¿How effective are Backbench MPs? Úna Richards 25/03/2013 A backbencher is an MP who does not hold governmental office, and is not a frontbencher spokesperson in the opposition. There is no said test of backbench MP efficiency, however we can come up with a measure of their effectiveness by looking at how effective they are within their role. What are they expected to do? Do they fulfil their role? In recent years, a large number of backbencher MPs have become more effective despite their limited air time, nowadays the majority of backbench MPs are often more active and involved in debates and plenary discussions. A key function of backbencher MPs is that they represent the people of their own constituency whenever they are involved in government policy. It is typical for local MPs to bring up issues relating to their constituency and become active in decisions that are likely to affect their particular constituents. For example, when there emerged a proposal to build a third runway at Heathrow airport in 2009-10, the relevant MPs from constituencies in the Thames Valley, such as John McDonnel MP, actively opposed the plans or sought to change the details of those plans. ...read more.

There is a common view that going against the PM/head of opposition and select committee ministers may have a negative effect on a backbencher?s political career, as they are less likely to get promoted. Therefore, they often lack influence or say in the government?s planned policies or bills. Although, occasionally it?s the courage of a backbench MP to criticise the government that works in their career?s favour, as they are seen as passionate about political issues. For example, Margaret Thatcher, when she was a backbencher in the early 60s, openly disagreed with the majority of the Conservative party on the topic of birching but within 3 years she had moved to the front bench of the Conservative party. Indeed, it is important to highlight that not all backbenchers are afraid of putting out their ideas for new legislation. For backbenchers, proposing legislation is a difficult process; it has to be financed by a pressure group or has to be strongly supported by the government. Perhaps, it?s for this reason that Backbencher effectiveness has come into question, a lot of the time it?s simply too difficult to make any kind of substantial difference because of backbencher status within Parliament. ...read more.

Another factor that makes a lot of backbenchers ineffective in terms of scrutiny is that many avoid challenging the more high-status members of Parliament due to their fear that if they were to do so it may harm the growth of their political career, and chances of promotion. Although it is important to stress this is only the case with some backbenchers, many are quick to scrutinise the actions and proposed legislation of the leading politicians in Parliament. In the 30 minute sessions they have for scrutiny, backbenchers closely investigate whether funds are being used effectively, and whether the government are acting in public interest. Many backbenchers express criticism towards the work of those that they scrutinise and are quick to offer improvements. Evidently, there is a mixture in the extent of effectiveness among backbenchers, but the majority are largely effective when it comes to their expected function, scrutiny. Overall, backbenchers are effective in that they are largely able to fulfil their roles and the functions that come with the role. There are various backbenchers that have less prominence than others in Parliament but that?s not to say they are unable to represent, scrutinise or propose new legislation. Indeed, on a general scale, the majority of backbenchers are effective. ...read more.