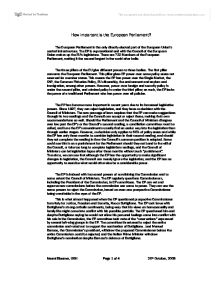 How important is the European Parliament?

How important is the European Parliament? The European Parliament is the only directly elected part of the European Union's central infrastructure. The EP is supranational and with the Council of the European Union makes up the EU's legislature. There are 732 Members of the European Parliament, making it the second largest in the world after India. The three pillars of the EU give different powers to three bodies. The first pillar concerns the European Parliament. This pillar gives EP power over some policy areas not reserved for member states. This means the EP has power over the Single Market, the CAP, the Common Fisheries Policy, EU citizenship, the environment and asylum and immigration, among other powers. However, power over foreign and security policy is under the second pillar, and criminal policy is under the third pillar; as such, the EP lacks the power of a traditional Parliament who has power over all policies. The EP has become more important in recent years due to its increased legislative powers. Since 1997, they can reject legislation, and they have co-decision with the Council of Ministers. The new passage of laws requires that the EP can make suggestions through its two readings and the Council can accept or reject these, making their own recommendations as well. Should the Parliament and the Council of Ministers disagree over law past the EP's or the Council's second reading, a conciliation committee must be called, and here the EP's amendments usually find an easier way into the legislation than through earlier stages. ...read more.

When the MEP gets to Parliament, they sit with an EU wide group, such as the European People's Party (where the UK Conservatives MEPs sit) or the "non-descrits" (MEPs who do not join an EU wide party, but sit together in a group). These are loosely connected parties based on vague ideological allegiance. The importance of an individual MEP could therefore be greatly important. As there is no government dominating individuals through a whip system as in Westminster, the individual MEP has far more power than he might do in individual state parliament. However, this also allows extremist voices to be heard as clearly in the debate chamber, even if they will not find as much support from fellow MEPs or the public. A sometimes forgotten role of the MEP is his committee work. When an MEP becomes an MEP, he must join at least one committee, which works all year round on specific topics. The MEP can join more than one committee on any topics he likes. Here, an MEP's voice can be heard in a chamber where everyone is absolutely interested in the topic, whereas in the central Parliament building those listening may not have a vested interest. This is an arena where everybody is interested and has, most probably, some form of personal or professional experience in the field and therefore a good knowledge of the topic. As in Westminster, committees are vital. In the Westminster Parliament, adversarial politics and active debate is practised. ...read more.

However, later in 1990, the Commission proposed a piece of legislation over public health under the Eurotom Treaty, but the European Parliament maintained the legislation fell under EEC Treaty. The EP attempted to bring the case to the ECJ and this time the ECJ ruled that it was nonsensical to have a body of the European Union treated unequally in the eyes of the law. According to the ECJ, Article 175 (now 232) allows the EP to bring cases. The European Parliament has become more and less significant in the past and to gauge this would be easier than to answer how important is the European Parliament. Based on the considerations I have put forward, I would venture that in some areas, such as public opinion and relation to other EU institutions, the EP is somewhat less significant than it ought to be. On the other hand, even though the way the EP interacts with other institutions is flawed, whether other institutions want to safeguard their own powers against the EP or simply that the EU has improvements left to make that will be addressed in future treaties, it still gets legislation through that affects our lives, for the most part, for the better. The EP is the one democratically elected body representing all EU citizens - the EP counters the Council's democratic deficit through co-decision, although this could improve. This shows that the European Parliament is important where it counts most: in representing the citizens of the EU, the lives of whom the EP seeks to protect and better. ?? ?? ?? ?? Naomi Bloomer, U6H Page 1 of 4 20th October, 2008 ...read more.