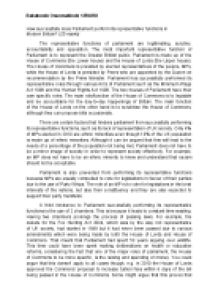 How successfully does Parliament perform its representative functions in Modern Britain?

This is because it leads to constant time wasting. Having two chambers prolongs the process of passing laws. For example, the debate for the Fox Hunting Act 2004, which was by the way not representative of UK society, had started in 1949 but it had never been passed due to various amendments which were being made by both the House of Lords and House of Commons. That meant that Parliament had spent 53 years arguing over wildlife. This time could have been spent making deliberations on health or education reforms, considering the fact that one of the major roles of parliament, the House of Commons to be more specific, is the raising and spending of money. You could argue that this doesn?t apply to all cases though, e.g. in 2010 the House of Lords approved the Commons? proposal to increase tuition fees within 6 days of the bill being passed in the House of Commons. Some might argue that this proves that Parliament does not reflect the lower class in Britain because majority of MPs and Peers are from upper-middle class families who will not be affected greatly by the increment. ...read more.

This reduces the likelihood of a bill which could favour a constituency from being passed or even heard. Although this usually reduces the likelihood of bills being passed, the smaller number of MPs who are present during the 10 minute bill reduces the amount of scrutiny which the bill undergoes and this sometimes increases the chances of a bill being passed. To conclude I think that the UK parliament does successfully perform its representative functions in modern Britain but it only does this to an extent due to certain hindrances. E.g. the House of Lords holds a significant role in the running of Parliament, even though it?s an unelected branch of the legislature. This means that it cannot be held accountable. This lack of accountability means that Peers are not obliged to represent society. The two Houses of Parliament do work hand in hand to ensure that they do perform their representative roles as best as possible when necessary e.g. the 2006 Terrorism Act where the House of Lords jointly made amendments to ensure that other branches of the state, namely the judiciary, could interpret and enforce the law as efficiently as possible. ...read more.