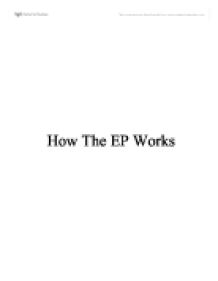 How The European Parliament Works

How The EP Works �It is split between Brussels, Luxembourg and Strasbourg. Parliamentary committees spend two weeks a month meeting in Brussels and consulting the commission and the Council of Ministers. Although parliament does not sit in Luxembourg, its secretariat, which is responsible for the day-to-day running of parliamentary business, is based there. �The European Parliament is the only Community institution that meets and debates in public. Its decisions, positions and proceedings are published in the Official Journal of the European Communities. ...read more.

�The President oversees all the activities of Parliament and its constituent bodies. He or she presides over its plenary sittings and chairs the meetings of the Bureau and Conference of Presidents. He or she represents Parliament in all external relations, particularly international relations. �The Bureau is the regulatory body responsible for Parliament's budget and for administrative, organisational and staff matters. In addition to the President and fourteen Vice-Presidents, it includes, in a consultative capacity, the five Quaestors, who are responsible for administrative matters relating directly to MEPs. ...read more.

They also prepare opinions for other standing committees.In addition to these standing committees, Parliament can set up temporary committees and committees of inquiry. �The Secretariat Under the authority of a Secretary-General some 3,500 officials, recruited by competition from all the countries of the Union, work in the service of the European Parliament. The political groups have their own staff and Members their own assistants. The European Parliament has to work within the constraints of multilingualism - which accounts for about one third of its staff - and the fact of having three places of work - Strasbourg, Brussels and Luxembourg. Running the European Parliament costs � 2.5 per year per EU inhabitant (the equivalent of 1.08% of the Union's total budget). ...read more.