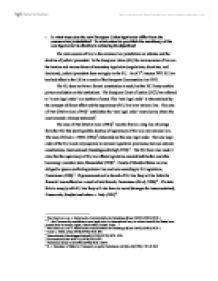 In what ways does the new European Union legal order differ from the common law jurisdiction? To what extent do you think the machinery of the new legal order is effective in achieving its objectives?

* In what ways does the new European Union legal order differ from the common law jurisdiction? To what extent do you think the machinery of the new legal order is effective in achieving its objectives? The main sources of law in the common law jurisdiction are statutes and the doctrine of judicial precedent. In the European Union (EU) the main sources of law are the treaties and various forms of secondary legislation (regulations, directives, and decisions), judicial precedent does not apply in the EU. As of 1st January 1973 EU law has had effect in the UK as a result of the European Communities Act 1972. The EU does not have a formal constitution as such, but the EC Treaty confers powers and duties on the institutions. The European Court of Justice (ECJ) has referred to 'a new legal order' in a number of cases. This 'new legal order' is characterised by the concepts of direct effect and the supremacy of EU law over national law. The case of Van Gend en Loos (1963)1 establishes the 'new legal order' most clearly, where the court created a famous statement2. The case of Van Gend en Loos (1963)3 was the first in a long line of rulings from the ECJ that developed the doctrine of supremacy of EU law over national law. The case of Costa v. ...read more.

Certain paragraphs in pieces of secondary legislation must not be considered in seclusion, but within context of the whole instrument. There is said to be a lack of precision in some EU provisions and references to the 'framework of community law' as in Costa v. ENEL (1964) 21 are not uncommon. This is in obvious contrast to the common law system where courts look to the meaning of the words before them, in their immediate context. The main teleological approach requires the judge to look to the purpose or object of the text before him. This approach gives the judges the most leniency in their interpretation, as they can even look to the aims of the treaties and the community as a whole. The main purposes of teleological interpretation are as follows; * To promote the objective for which the provision was made. * To prevent unacceptable consequences flowing from a literal interpretation of the wording. * To fill gaps in the legal order. The statement22 of the court in CILFIT (1982)23 illustrates clearly how the courts look to EU law as a whole. A statement24 from Bosch v. De Geus (1962)25 is also noteworthy. Using teleological interpretation the Court's often make decisions, ignoring express words of EU legislation. This is done to; * Strengthen the EU's structure. * Increase scope and effectiveness of EU law. ...read more.

Article two has regard to economic activities and harmonious development, obviously the mechanism of direct effect is plays a role in ensuring this. As I have shown the ECJ are willing to expand the law here to ensure development of the law is harmonious in all Member States. Article ten is the solidarity principle, this contains a positive burden to support EU law, and a negative burden to not adopt law opposed to the development of EU law. The principle of state liability as first mentioned in Francovich, Bonifaci and others v. Italy (1991)39 acts as an incentive to states to implement and comply with EU law. Articles twelve and thirteen have regard to discrimination in a number of forms. Article 12 has direct effect, whilst Article 13 does not. A successful claim under Article requires a unanimous decision from the Council of Ministers, it is clear to see the potential of this Article is limited. Due to the mechanisms of direct effect and direct applicability and some creative interpretation by the ECJ, both in preliminary rulings and case judgements all the basic principles relating to; * Free movement of goods and persons. * Sex and nationality discrimination. * Competition policy. May now be invoked by individuals before their national courts. The legal order is still developing and thus so is the body of legislation surrounding it. So far there have not been any horrendous mistakes or problems on the road to achieving the objectives of the legal order. ...read more.