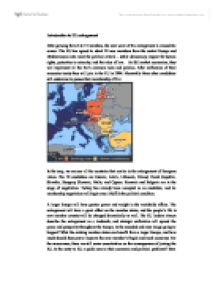 Introduction to EU enlargement After growing from 6 to 15 members, the next wave of EU enlargement is around the corner. The EU has agreed to admit 10 new members from the central Europe and Mediterranean who meet the political criteria - stable democracy, respect for human rights, protection to minority, and the rules of law. As full market economies, they will implement all the EU's common rules and policies. After ratification of their accession treaty they will join in the EU in 2004. Meanwhile three other candidates still endeavour to pursue their membership of EU. In the map, we can see all the countries that can be in the enlargement of European Union. The 10 candidates are Estonia, Latvia, Lithuania, Poland, Czech Republic, Slovakia, Hungary, Slovenia, Malta, and Cyprus. Romania and Bulgaria are in the stage of negotiation. Turkey has already been accepted as an candidate, and its membership negotiation will begin once it fulfills the political condition. A larger Europe will have greater power and weight in the worldwide affairs. The enlargement will have a great effect on the member states, and the people's life in new member country will be changed dramatically as well. The EU leaders always describe the enlargement as a landmark, and strategic unification will spread the peace and prosperity throughout the Europe. Is the sounded and rosy image going to happen? What the existing member states can benefit from a larger Europe, and how much should they pay to improve the new member's fragile and weak economy. ...read more.

3. Reforming the functioning of the Council is a key issue relevant to the institutional reform. Table1: The distribution of profit derived from the EU eastward enlargement by the current EU members. Share of total EU-1 real income gain,% Germany 33.8 France 19.3 United Kingdom 14.1 Italy 8.5 Spain 7 Netherlands 4.6 Sweden 3.9 Belgium/Luxembourg 2.6 Austria 2.6 Denmark 1.9 Finland 1.4 Ireland 0.3 Greece 0.3 Portugal 0.4 Source: Breuss, 2001 Table 1 shows distribution of trading profits received by western companies from trade with countries of central and eastern Europe. Germany is clearly the most important beneficiary of economic integration. Its trade with Central and Eastern Europe comes to 9% of its total external trade and around 34% of total EU trade with this region (although its economy only accounts for around 25% of the EU economy in terms of GDP). "Already, Eastern European markets are more important for Germany than the US and other markets" (Hoyer, 2001) The "core" countries for trade with Eastern Europe, i.e. Germany, France, United Kingdom and Italy have the best chances for economic growth and can carry out significant structural changes in the East. This creates additional demand for goods from other EU countries, particularly from less developed Mediterranean region and countries of the Mediterranean, Central and Eastern Europe will deepen their trade relations. Cost: The challenge of the enlargement for the current states is mainly from the cost of helping the countries with lower level of economy to meet the condition, reducing the disparities between the current member states and the candidate countries, harmonizing their policies and practice in economics, politics, agriculture and industry. ...read more.

An economist at Slovak Foreign Policy Association said "there is this myth that we will suddenly claim our rightful place as rich country in the heart of Europe, but that will take years and the expectations are bound to be disappointed". (Ardy, 2001) Things will get worse before they get better. Conclusion: The EU's enlargement should be a win-win situation both to the current members and candidate members. The biggest economic prize offered by EU enlargement is a single market with 500 million people, and all the participants have to respect the same regulatory principles. The development will boost the business confidence. The ultimate beneficiaries will be the citizen of Europe, as an individual liveing in a democratic society or as a consumer enjoying the benefit of integrated market and as a worker or business people working to develop European economy. It is undoubtedly that the enlargement will bring in huge amount of cost. Some people would express their fears on the cost, but cost is inevitable in the globalisation and it will benefit EU in the long run. It is far better to manage the cost in the common interest-Enlargement offers the best opportunity to do it appropriately in the European context. Reference * Breska, E et al (2002) Costs, benefits and chances of eastern enlargement for the European Union * Hoyer, W.(2001) Perspectives of European Integration after the European Council in Luxe,mbourg * Gros, D. (2002) Who wants to pay for enlargement? http://www.ceps.be/Commentary/April02/pb-22.php * Baldwin, R. Francois, J and Portes, R. (2002)The costs and benefits of EU enlargement * Official Site of EU http://europa.eu. ...read more.