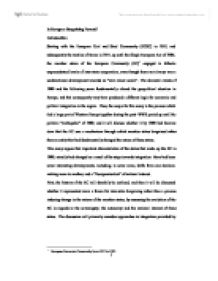 Is Europe a Bargaining Forum?

Is Europe a Bargaining Forum? Introduction Starting with the European Coal and Steel Community (ECSC) in 1952, and subsequently the treaties of Rome in 1957, up until the Single European Act of 1986, the member states of the European Community (EC)1 engaged in hitherto unprecedented levels of inter-state cooperation, even though there not always was a unidirectional development towards an "ever closer union". The dramatic events of 1989 and the following years fundamentally altered the geopolitical situation in Europe, and this consequently may have produced a different logic for economic and political integration in the region. Thus, the scope for this essay is the process which tied a large part of Western Europe together during the post-WWII period up until the political "earthquake" of 1989, and it will discuss whether it by 1989 had become clear that the EC was a mechanism through which member states bargained rather than an entity that had fundamentally changed the nature of those states. This essay argues that important characteristics of the states that made up the EC in 1989, actually had changed as a result of the steps towards integration: there had been some interesting developments, including, in some areas, shifts from one decision-making arena to another, and a "Europeanisation" of national interest. First, the history of the EC will sketchily be outlined, and then it will be discussed whether it represented more a forum for inter-state bargaining rather than a process inducing change in the nature of the member states, by assessing the evolution of the EC in regards to the sovereignty, the autonomy and the national interest of these states. The discussion will primarily consider approaches to integration provided by state-centric and (historical) institutionalist theories2. Finally, the essay gives a brief description of the development post-1989. Concepts A few clarifications on the concepts in question may be useful for the discussion, and given the limits for this essay, it will for the sake of brevity be relied upon rather simplistic and superficial definitions. ...read more.

Once there is movement towards supranationalism, EC rules also produce a logic of its own, which may be called "institutionalization" (Sweet and Sandholtz 1998:2-16). Pierson (1998:34-50) lists four reasons for why the integration process may not be fully controlled by the participating governments. Firstly, EC organisations have acquired autonomous capabilities for decision-making; secondly, political decision-makers have a restricted time-horizon; thirdly, unintended consequences of decisions may be considerable; and, finally, there may be shifts in the preferences of political leaders. Furthermore, he argues that once states lose some control over the process, it may be difficult to regain it because of three reasons, namely, the resistance of supranational actors, institutional barriers to reform, and sunk costs and the rising price of exit. Whereas early European integration theory and ideology envisioned the "end of politics" as the result of an increasingly technocratic supranational management,12 political struggles remained very much alive, and interest conflict continued to be channelled through the state; the state remained the arena where the 'national interest' was being defined, and the state continued to represent the national interests vis-�-vis other states. Politics continued after the establishment of the European institutions to be shaped in a domestic setting. As noted by Grosser (1980:330), the common Franco-German aim which was affirmed in 1950 and then with growing vehemence up to 1963, and after that date with a persistence of varying but dependable intensity, does not prevent a kind of drifting apart of the two countries, less in their relations than in the differing evolution of their internal political climate. Yet it is not contradictory if one also notes growing convergences which are anchored in reality rather than fully perceived". The steady growth of interaction between the national societies of the EC implied an ever increasing interdependence between them. This was true especially for the economic field and consequently economic groups had their interests vested in continued cooperation and even greater integration. ...read more.

Anderson salutes, however, the modified tone taken by Milward in his more recent writings. "Instead of relying on the claims of consensus, Milward now proposes the notion of allegiance - 'all those elements which induce citizens to give loyalty to institutions of governance' - as the key to understanding European integration". 11 The perhaps most prominent neofunctionalist scholar, E.B. Haas, predicted in his book The Uniting of Europe (1968:29) that "the established nation state is in full retreat in Europe". The events of the late 1960s and early 1970s induced him to first qualify his theory, and later commit full retreat, as he admitted that "what once appeared to be a distinctive supranational style now looks more like a huge regional bureaucratic appendage to an intergovernmental conference in permanent session" (Haas 1976:6). 12 According to Wallace (1997:25-26) the "idealists who defined the rhetoric of European integration were anti-nationalists: shaped by the bitter experiences of the Second World War, the pathological mutation of nationalism into Fascism and National Socialism, the military defeat of Germany's neighbours and the corrosive impact of occupation." Furthermore, the "technocratic" approach of early theorists and practitioners of "the Community Method" was also anti-political. It relied on technology as the fuel, and on the logic of the market as the motor of integration: the drive for economic modernization would lead to political unity. It was the old Saint-Simonian dream of depoliticised progress, accompanied by one idea that, at first sight, seemed quite political: the idea that the gradual dispossession of the nation-state and the transfer of allegiance to the new Community would be hastened by the establishment of a central quasi-federal political system (Hoffman 1982:29). 13 They argue, however, that these must be seen in the context of influences and pressures, as they depend on prior intergovernmental bargaining. Institutional change must also be understood as some form of adaptation to the global economy, and in addition, they say that European integration in the 1980s cannot be fully understood without seeking explanation in a hypothesis of preference-convergence between the states in the EC (Keohane and Hoffmann 1990; 1991:18-25). 1 ...read more.