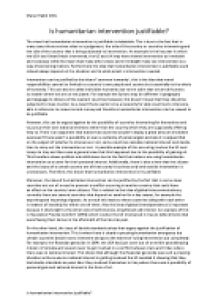 ﻿Manar Habib 13DL Is humanitarian intervention justifiable? The view that humanitarian intervention is justifiable is debatable. This is due to the fact that in many cases there are two sides to a judgement, the side of the country or countries intervening and the side of the country that is being subjected to intervention. An example is the Iraq war in which the USA and Great Britain intervened, the US and UK may have viewed intervention as inevitable and necessary while the Iraqi?s had many other views and in hindsight many see intervention as a way of worsening matters. Furthermore the idea that humanitarian intervention is justifiable could indeed always depend on the situation and to what extent is intervention needed. Intervention can be justified by the idea of ?common humanity?, this is the idea that moral responsibilities cannot be limited to a country?s own people and country but essentially to the whole of humanity. This can also be called indivisible humanity due to the claim that we are all humans no matter where we are on the planet. For example the Syrians may be different in geography and language to citizens of the western countries however; this doesn?t mean that they should be subjected to mass murder. ...read more.

Also the idea of global interdependence is important because it sheds light to the other side of self-interest; enlightened self-interest. An example of this is ?Operation Provide Comfort? (1991) which is when the US intervened in Iraq to defend Kurds that were fleeing their homes in the aftermath of the Iran-Iraq war. On the other hand, the issue of double standards arises that argues against the justification of humanitarian intervention. This is when there is clearly a pressing humanitarian emergency but certain countries decide not to intervene and go to the extent of ruling intervention out completely. For example, the Rwandan genocide in 1994, the USA had just come out of a terrible peacekeeping mission in Somalia and vowed never to get involved in a conflict between clans and tribes where there was no national interest. This shows that although the Rwandan genocide was such a pressing situation as there was no national interest in getting involved the US avoided it showing that they had double standards as years later they involved themselves in Iraq where there was a possibility of personal gain and national interest in the form of oil. ...read more.