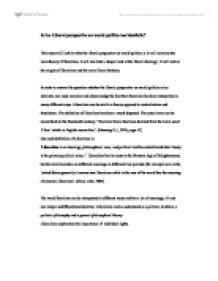 Is the Liberal perspective on world politics too idealistic?

Is the Liberal perspective on world politics too idealistic? This essay will look at what the liberal perspective on world politics is. It will examine the main theory of liberalism, it will also take a deeper look at the liberal ideology. It will look at the origins of liberalism and the main liberal thinkers. In order to answer the question whether the liberal perspective on world politics is too idealistic one must examine and acknowledge the fact that liberalism has been interpreted in many different ways. Liberalism can be said is a theory opposed to centralization and absolutism. The definition of liberalism has been a much disputed. The actual term can be traced back to the fourteenth century. 'The term liberal has been derived from the Latin word 'Liber' which in English means free'. (Manning D.J, 1976, page 51) One such definition of Liberalism is: 'Liberalism is an ideology, philosophical view, and political tradition which holds that liberty is the primary political value.[1] Liberalism has its roots in the Western Age of Enlightenment, but the term has taken on different meanings in different time periods (for example now in the United States generally it means new liberalism while in the rest of the world has the meaning of classical liberalism'. (Gray, John. 1986) The word liberalism can be interpreted in different ways and has a lot of meanings; it's not one simple undifferentiated doctrine. Liberalism can be understood as a political tradition, a political philosophy and a general philosophical theory. Liberalism emphasizes the importance of individual rights. ...read more.

They believe that war is not inevitable and through co operation and involvement of an effective medium such as the UN, conflict and war could be avoided. They argue that this could also eradicate the anarchical condition of the international system. The Liberal ideology is, that by emphasising and promoting freedom that this will in turn result in peaceful Liberal states, founded on the thesis of basic human rights, with tolerance for religious freedom and freedom of speech. Kant a major influence on the liberal perspective on world politics, states that peace and harmony can be established in world politics through the creation of a pacific federation of nations. He states that International law need to be established and that these laws would essentially be enforced and regulated collectively. Kant came up the Democratic Peace Thesis. The general idea 'law' was that democracies do not fight each other. Perpetual Peace, written in 1795 (Kant, 1970, pp. 93-130), helps to understand the interactive nature of international relations. Kant states that systemic relations of states nor the varieties of state behavior independent from each other. He suggests that liberal states are not pacific in their relations with non liberal states. Kant argues that perpetual peace will be guaranteed by the ever-widening acceptance of three "definitive articles" of peace. When all nations have accepted the definitive articles in a metaphorical "treaty" of perpetual peace he asks them to sign, perpetual peace will have been established. Although Liberal perspective on world politics clearly shows a concern for citizen, states, IGO and Ngo's, it mostly emphasises the right of the individual and freedom. ...read more.

To conclude, although some of the ideas and principals of liberalism have been put into practice, it can be argued that for the most part Liberalism is just a mostly theory that looks good on paper, but when in practice its pretty much ineffective. Most of its principals are too idealistic. Liberalism does not explain the balance of power in world politics instead it fantasises of world were complex interdependence pretty much prevents conflict and war. Hobbes states that "political authority is artificial: in the "natural" condition human beings lack government, which is an authority created by men". He claims that "the only authority that naturally exists among human beings is that of a mother over her child, because the child is so very much weaker than the mother (and indebted to her for its survival)".(Willliams, G. Moral and Political Philosphy. 2006) This is evidently contradicted in contemporary world politics. Political power is very much real and not artificial, the actions of powerful nations although sometimes questioned are not regulated as much as less powerful nations. Balance of power is clearly shifted in favour of nations such as US, Britain and France. Hypocrisy is very much rife in world politics, no one questions the fact that all three nations have nuclear power, yet everyone is expected to be opposed to the alleged development of nuclear capabilities in Iran. Liberalism especially Neo Liberalism fails to mention the substantial influence of other institutions such as the media on world politics. Having economic ties and being somewhat intertwined does not prevent conflict, because most conflicts and wars in the world are not influenced by economical reasons. Most are about religion e.g. Yugoslavia, territory e.g. Israel-Palestine and Kashmir and ethnical cleansing e.g. Rwanda and Sudan. ...read more.