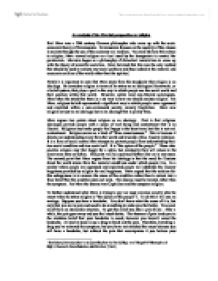 An analysis of the Marxist perspective on religion

An analysis of the Marxist perspective on religion Karl Marx was a 19th century German philosopher who came up with the socio-economic theory of Communism. Communism focuses on the equality of the classes in society through the use of the economy as a medium. You may ask how this relates to religion; Marx viewed religion as a tool used by the bourgeoisie to control the proletariats. Marxism began as a philosophy of dialectical materialism to come up with the theory of scientific socialism. Marx believed that this was the only method that should be used to analyse any social problem and thus looked at the material and economic realities of the world rather than the spiritual. Firstly it is important to note that Marx starts from the standpoint that religion is an ideology. He considers religion in terms of its status as an ideological framework, or a belief system, that plays a part in the way in which people see the social world and their position within that world. However, unlike most non-Marxist sociologists, Marx takes the stand that there is a set way in how we should analyse religion. For Marx, religious beliefs represented a significant way in which people were oppressed and exploited within a non-communist society, namely Capitalism. Marx saw religion not just as an ideology, but as an ideology that is plainly false. Marx argues two points about religion as an ideology. First is that religious ideologies provide people with a sense of well-being and contentment that is an illusion. Religions may make people feel happy in the short-term, but this is not real contentment. Religion serves as a kind of "false consciousness." This is because it directs our understanding away from the world and towards a false, illusory existence. It is a form of social control that attempts to prevent people from understanding their true social condition and true social self. ...read more.

This helps to affirm the social bonds between them as human beings. Production of commodities on a co-operative basis therefore has two main benefits. It binds people together on the basis of mutual economic need. Society needs to work together to ensure the survival of the species. Also, it binds people on the basis of mutual political need. By co-operating in this way we get satisfaction from knowing that the work we do benefits others. We consider ourselves a valued and necessary member of society. Thus, the economic and political systems are seen to be mutually related and dependent. The economic system produces political relationships. This Marx felt was perfectly expressed in Communism. A problem arises, however, when economy and politics are separated, as in a Capitalist society. In Capitalist societies commodity fetishism is prevalent. People within a capitalist society find that their lives are organised through the medium of commodities. They trade their labour-power for another commodity, money. This then in turn is traded for another commodity. The co-operative social nature of society is destroyed by the abstraction of commodities as "use-value" (the usefulness of a commodity) is separated from "exchange-value" (the marketplace value of a commodity). This is what Marx defines as "fetishism". As a result of this "fetishism" producers and consumers have no conscious agreement to provide for each other, or even direct human contact. People no longer produce things for the benefits they bring to themselves and others; rather, a specific social class reaps the major benefit from the production process. Furthermore, by breaking this natural relationship between the economic and political systems, a severe social problem is created. The main mechanism for the integration of individuals into society is destroyed. As a result of this commodity fetishism, people begin to feel alienated. Within a Capitalist society people still need to feel that they are a valued and useful member of society. ...read more.