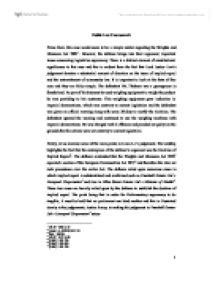 Public Law Coursework Prime facie, this case would seem to be a simple matter regarding the Weights and Measures Act 19851. However, the defence brings into their argument, important issues concerning legislative supremacy. There is a distinct element of constitutional significance to this case and this is evident from the fact that Lord Justice Law's judgement devotes a substantial amount of direction on the issue of implied repeal and the entrenchment of community law. It is important to look at the facts of this case and they are fairly simple. The defendant Mr. Thoburn was a greengrocer in Sunderland. As part of his business he used weighing equipment to weigh the product he was providing to his customer. This weighing equipment gave indication in imperial demarcations, which was contrary to current legislation and the defendant was given an official warning along with some 28 days to rectify the violation. The defendant ignored the warning and continued to use the weighing machines with imperial demarcations. He was charged with 2 offences and pleaded not guilty on the grounds that his actions were not contrary to current legislation. Firstly, let us examine some of the main points in Laws L.J's judgement. His lordship highlights the fact that the centrepiece of the defence's argument was the Doctrine of Implied Repeal2. ...read more.

Lord Bridge of Harwich speaking in R v Secretary of State for Transport, Ex parte Factortame Ltd11 makes an important point: "If the supremacy within the European Community of Community law over the national law of member states was not always inherent in the E.E.C. Treaty it was certainly well established in the jurisprudence of the European Court of Justice long before the United Kingdom joined the Community. Thus, whatever limitation of its sovereignty Parliament accepted when it enacted the European Communities Act 1972 was entirely voluntary" This is a point which Laws L.J. agrees with in his judgement and he finds that upon joining the EU we sacrificed some of our sovereignty in order to give power and effect to the EU. Laws L.J. adds further to his statements on the relationship between the UK and the EU in the final part of the judgement. He argues that when considering the United Kingdom' relationship with the EU there are four crucial propositions that are required. Firstly, his Lordship states that all the specific rights and obligations which EU law created are incorporated into our own national law and given supremacy over all domestic law until such time as the 1972 act is expressly repealed. This means that any law passed after the 1972 act came into force must be in accordance with or subordinate to EU Law. ...read more.

It forms a basis for all future cases relating to the relationship between the two legislative powers. The impact will primarily be felt in those cases which concern a) conflicts between EU law and domestic statute, b) the implied repeal of acts with constitutional effect and c) the implication of the UK's dualist14 approach to EU law. It will also have some impact on cases which involve the issue of entrenched EU law as it was found convincingly in this judgement that certain EU legislation can become entrenched. In conclusion, this case has an important impact on the issue of supremacy. The conclusion of Laws L.J.'s judgement is that Parliament remains sovereign as its sovereignty is a fundamental part of our constitution and no parliament can alienate its own sovereignty. Thus it is only possible for European Law to have a contingent supremacy based upon the power given to it by parliament, a power which can always be stripped away by the passing of an Act. He adds that cases like Factortame15 show that there is an impasse between the two legislative bodies and Laws L.J. states that in order to overcome this, what has in effect been created by the courts are two separate supremacies. Therefore we can see the importance of what this judgement means, no foreign power has the right to take away the supremacy of parliament, such is our constitution. ...read more.