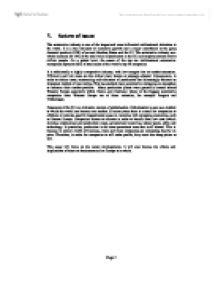 The EU automotive industry currently faces a number of issues. It lags behind the US and Japan in terms of productivity; labour productivity is currently 25% less than US and 30% less than Japan. However, labour costs are comparable

1. Nature of Issue The automotive industry is one of the largest and most influential multinational industries in the world. It is a key indicator of economic growth and a major contributor to the gross domestic product (GDP) of several Member States and the EU. The automotive industry as a whole accounts for 10% of the total value of production in the EU and employs around twelve million people. On a global level, the assets of the top ten multinational automotive enterprises represent 28% of total assets of the world's top 50 companies. It is additionally a highly competitive industry, with low margins due to market saturation. Efficiency and low costs are the critical main factors or strategy adopted. Consequence, in order to reduce costs, outsourcing and relocation of production has increasingly become an important method of cost cutting. This has enabled many automotive companies to strengthen or enhance their market position. Many production plants were generally located around Western Europe especially within France and Germany. Many of the biggest automotive companies from Western Europe are of these countries, for example Peugeot and Volkswagen. Expansion of the EU is a miniature version of globalisation. Globalisation is seen as a method to which the world can become one market. In recent years there is a trend for companies to offshore or relocate specific departmental areas to countries with emerging economies, such as Eastern Europe. Companies choose to relocate in order to benefit from low costs (which includes employment and production costs), government incentives, labour pools, skills and technology. In particular, production is the most prominent area that is off shored. This is because in today's world of business, more and more companies are competing heavily on price. Therefore, in order for companies to still make profits, they must also keep prices as low. This essay will focus on the recent developments. It will also discuss the effects and implications of these on businesses and on Europe as a whole. ...read more.

3.2 Drawbacks There are however drawbacks in relocating to Eastern Europe, which will now be discussed: Redundancies As automotive companies shut down production plants, it is causing many employees to become redundant. This has angered many trade unions believing it to be "unfair" to its members since they cannot compete against the attraction of lower costs in Eastern Europe. It may also be hard for these former employees to find new jobs because of lack of skills and qualifications. By relocating to Eastern Europe, many companies would prefer to take over existing plants and factories as this would mean a saving in cost, however in doing this, it would lead to redundancies in the former staff that worked there before. This is due to Western European companies bringing in new technology to the existing "old" Eastern European factories. With newer technology, efficiency is improved and more and more work is carried out by robots and computers. Because of this, less human employees are needed; meaning those that are nearer the unskilled end of the workforce will be most definitely made redundant. Even though the new companies will probably try to retrain the existing workforce to be up to date with using the new technology, less people are required to operate the machinery. As people are made unemployed, this will cause bad relations with trade unions, causing more unnecessary problems for companies. If they are unlucky, the trade unions may make the problem bigger and ask for compensation as well as making bad publicity for the company. This could seriously affect the future of the company in that particular country or even neighbouring countries. Regulation Another drawback would be regulations. By relocating to Eastern Europe, some countries may have certain regulations which may hinder the progress of companies. This may include regulations to do with taxes incurred due to movement of labour or capital, or certain restrictions for new companies entering their market. ...read more.

With no internal tariffs, the suppliers would get the same benefits as the companies and be able to freely trade and move their labour and capital across borders. There is however the additional start-up costs associated with relocation, which would affect the supplier in the short-term. 5. Conclusion Based on performance on the global automotive market, it can be concluded that the European automotive industry is competitive. However, success in the future is clearly not guaranteed. Japanese manufacturers are equally strong in investing in automotive innovations and US producers are taking advantage of not only the large home market but have also pursued internationalisation strategies for years. There has been a sharp decline in the competitiveness of the EU as a whole and this trend must be reversed. In order to improve the automotive sector, the European Commission set up CARS 21 in January 2005 in order to improve the regulatory framework within EU. The work by this body can be divided into four distinct areas; better regulation, competitiveness, environment and road safety. This is one of the methods of increasing the competitiveness. Nevertheless, the automotive industry is facing rising costs. For example, there is pressure for automobiles to become more environmentally friendly and the reduction of emissions. Companies are beginning to research new ways to combat emission levels, but this comes at a high price. Therefore, in order to reduce costs many automotive companies must relocate and it is believed that this trend will increase in years to come as automotive companies struggle to retain margins. There has been some opposition from France and Germany against this. However, the main objective of expansion of the EU is to create a single European market, which can remain competitive in international markets and that can benefit from fewer trade boundaries internally. Full integration cannot exist without full cooperation between member states. Otherwise the EU as a whole cannot be successful and harmonisation cannot move forward. ...read more.