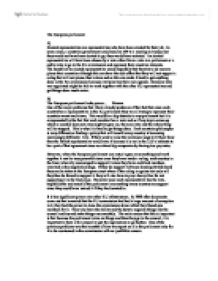 topic comes up which a member does not even slightly agree on, they can veto and the whole thing will be stopped. This is why it is hard to get things done. Each countries philosophy is very different so finding a policy that will benefit every country is becoming increasingly difficulty. E.G. If they want to raise the minimum wage to �10 per hour then the British representative would veto it because it is not in the U.K's interests to be a part of that agreement since we attract big companies by having low pay rates. However, when the European parliament can actual agree on something and work together it can be very powerful since once they have made a ruling, each country in the Euro is heavily encouraged to support it since they have each had members involved in the negotiation stage. ...read more.

It is has significant power over other EU infrastructure. In 1998 after documents came out that revealed that the EU commission had had a large amount of corruption in it, they had the power to close the commission down whilst they found new members for it. They also have the ability and the duty to regulate things like the council and try and make things run smoothly. The main reason that this is important is that because the parliament votes on things and then they go to the council, it is important to have a fair council to get the legalisation to go further. One of the previous problems was that months of time was spent on it in the parliament only for it to be overturned in the commission with no justifiable reason. ...read more.