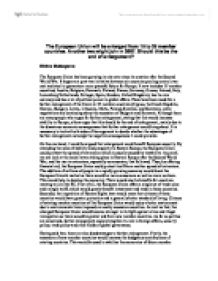 The European Union will be enlarged from 15 to 25 member countries. Another two might join in 2007. Should this be the end of enlargement?

The European Union will be enlarged from 15 to 25 member countries. Another two might join in 2007. Should this be the end of enlargement? Elvira Gubayeva The European Union has been growing in size ever since its creation after the Second World War. It began as a post-war initiative between six countries pooling control over coal and steel to guarantee a more peaceful future for Europe. It now includes 15 member countries( Austria, Belgium, Denmark, Finland, France, Germany, Greece, Ireland, Italy, Luxemburg Netherlands, Portugal, Spain, Sweden, United Kingdom), has its own currency and has a lot of political power in global affairs. Plans have been made for a further enlargement of the Union to 25 member countries (Cyprus, the Czech Republic, Estonia, Hungary, Latvia, Lithuania, Malta, Poland, Slovakia, and Slovenia), while negotiations are continuing about the accession of Bulgaria and Romania. Although there are many people who argue for further enlargement, stating that this would increase stability in Europe, others argue that this should be the end of enlargement, mainly due to the disastrous economic consequences that further enlargement could bring about. ...read more.

As well as that, the enlarged European Union would become stronger in its fight against crime and illegal immigration as there would be greater aid from new member countries. As far as politics are concerned, further enlargement could strengthen its role in foreign affairs, security policy, trade policy and other fields of global governance. Having said that, there are also disadvantages to further enlargement. Firstly, the accession of new member countries would increase the budgetary contributions of existing countries. This would be used to stabilise the economies of future member countries to fit to European Union standards. The great majority of countries likely to be brought into the EU by enlargement are below the poverty level. For example, Poland has a GDP per head that is less than half of the current European Union average. Secondly, there is a possibility of what is called social dumping. This means that workers from poorer accession countries would migrate to the West in search of employment.Unemployment in accession countries and countries wanting to join the European Union is already higher than the unemployment rate in countries which are part of the European Union. ...read more.

The cultures of different countries would mix, thus dissolving each country's own culture. Overall, although there are many advantages to further enlargement, the possible consequences that this enlargement could bring outweigh them. The larger the Union becomes, the less power it will have as there would be such a great number of factors that would need to be adressed, such as financial aid. Negotiations would be slow and ineffective as more member countries would provoke more disagreements. The enlargement would have a particularly negative effect on existing member countries, who would have to increase their taxations in order to help new member countries. Citizens should also be put into account and from a recent survey conducted in the United Kingdom, a member country, most people are negative in their responses whether the European Union should be further enlarged. Many people argue that Europe would lose its identity if its culture becomes so intermixed with other cultures. Therefore, the European Union should think very carefully about enlargement and its consequences in order to avoid it becoming ineffective as a system. ...read more.