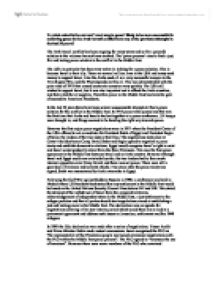 To what extent is the current 'road map to peace' likely to be more successful in achieving peace in the Arab-Israeli conflict than any of the previous attempts in the last 30 years?

To what extent is the current 'road map to peace' likely to be more successful in achieving peace in the Arab-Israeli conflict than any of the previous attempts in the last 30 years? The Arab-Israeli conflict has been ongoing for many years and so far a peaceful solution to the violence has not been reached. The 'peace process' aims to find a just, fair and lasting peace solution to the conflict in the Middle East. The USA in particular has been very active in looking for a peace solution. This is because Israel is their ally. There are several million Jews in the USA and many send money to support Israel. Also the Arabs used oil as a very successful weapon in the Yom Kippur War, and the West depends on this oil. This was demonstrated with the price rises of 1973 that caused economic recession very quickly. The USA still wished to support Israel, but it was also important not to offend the Arab countries, and their plentiful oil supplies. Therefore peace in the Middle East has been the goal of successive American Presidents. In the last 30 years there have been several unsuccessful attempts to find a peace solution for the conflict in the Middle East. In 1973 peace talks opened and this was the first time that Arabs and Israelis had sat together at a peace conference. ...read more.

Members of extreme groups such as 'The Popular Front for the Liberation of Palestine' said they would work against the "Agreement of Shame". There were immediate disagreements about the area if land around Jericho which the Palestinians would control and Israel specified 24km squared and Arafat demand 350km squared. However there were many Israelis who also opposed the new peace agreements, and one Israeli shot dead 29 Palestinians at prayer. This massacre immediately sparked off riots in Gaza, Jerusaluem, Nablus, Ramallah and Hebron. Again there was not peace. In June 2003 a new solution and agreement to try and end the violence in the Middle East. The new "Roadmap to Peace" is intended to be a goal driven, phase by phase route ending the conflict between Israelis and Palestinians within two years. It is also meant to have specific target dates, benchmarks and reciprocal confidence building measures built in. The plan was pieced together by diplomats from the USA, Russia, the European Union and the United Nations and was amended after consultations with Israelis and Palestinians. The first main stage of the Roadmap, originally intended to take place by May 2003 stated an end to violence against Israelis and Palestinians; Palestinian political reform; Israeli withdrawal and freeze on settlement expansion and Palestinian elections. This first stage was not achieved and there is still much violence against Israelis and Palestinians. ...read more.

However in source 7 it states that if terrorism does not stop then he will freeze the roadmap. These sources are both secondary and give opposing bias opinions, so are not too reliable. Source 8 praises Sharon, and shows how he is very committed to peace, and his actions he has taken towards peace. It is an argument for Israel and Sharon, but does consider the other side's point of view. According to source 3 the majority of Israelis 'somewhat support' the peace process. I do not think the 'Roadmap to Peace' will be successful. It will end up like the previous attempts at peace in the Middle East; Camp David, Madrid and Oslo, all of which failed. In my opinion there is no reason why the current Roadmap to Peace will be any different to these previous failures. The Roadmap has already failed its first target in May 2003, and does not seem to be heading towards any kind of peace. The leaders write the agreements but the people of Israel and Palestine have to live with them, many people on both sides still do not accept the right for the other to exist. Also there are still extreme terrorists groups who are never going to be happy with peace, and are going to jeopardise it every time. Violence in The Middle East has become a way of life for the people who live there, and its possible that that will never change. ...read more.