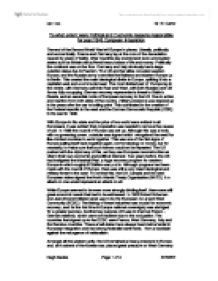 To what extent were Political and Economic reasons responsible for post 1945 European Integration.

To what extent were Political and Economic reasons responsible for post 1945 European Integration The end of the Second World War left Europe in pieces; Literally, politically and economically. France and Germany lay at the core of the devastation caused by years of battle, other countries lay scarred and even unoccupied states such as Britain still suffered heavy losses of life and money. Politically the continent was on the floor. Germany and Italy obviously had a large outsider status due to Fascism, The US and her allies occupied western Europe, and the Russian army controlled the Balkans and eastern Europe up to Berlin. This created the main ideological divide in Europe, splitting it into a capitalist west and a communist east. The most divided part of Europe lay in the centre, with Germany split into East and West, with both Russian and US forces fully occupying. German recovery represented a threat to Stalin's Russia, and an essential mode of European recovery to the US. Due to action and reaction from both sides of the country, military presence was stepped up in the years after the war to boiling point. ...read more.

In 1958, as the cold war continued, with its frigid centre and flashpoint peripheries, the treaties of Rome were signed and the European Atomic Energy Community (Euratom) and the European Economic Community (EEC) were established, thanks largely to pushing from the Benelux countries. On January 1st, 1958, the six ECSC states became the EEC. The most impressive effect this had was to 'bring back' West Germany and Italy into Europe. This answered the French 'German question'. German economic strength was not feared like military strength, but was seen to aid its neighbours. The formation of the EEC was a delicate balance of economic necessity and ideological concern. As the EEC took shape, in the early 1960's Britain wanted a piece of the action. In 1963 France, however, vetoed Britain's entry into the EEC fearing there was not enough room for another large country in the organisation. Again in 1965 French President Charles De Gaulle blocked the introduction of majority voting, saying that he wanted a "Europe des patries"1, not a supranational body. De Gaulle's sentiments were felt elsewhere however, as he also believed in independence from the superpowers, as any felt that Europe was being used as the board for an ideological game. ...read more.

The EEC was reborn as the EU and 3 more states joined, bringing the total number up to 12, however the bloody conflict in Yugoslavia highlighted the EU's military impotency. In 1995 the 12 became 15 and it was clear that the world was changing greatly. Globalisation and modern technology means that big businesses have forced a certain level of integration upon the world. The first decade of the EU saw the creation of a single common market with internal tariffs abolished and externals placed. The EU is now the worlds largest single trading block and in 2004 a staggering ten more countries will sign up, bringing the total member states to 25. More interesting still is that these states are all the old soviet states. The membership will mean a final end to European division and completeness to the process of integration that has taken place since 1949. I believe that although much of the processes of integration that have been outlined here were due to economic musts and ideological deterrency and promotion. The seeds that have always been sewn for European stages of integration have been sewn out of a basic necessity, a necessity to right what has been done wrong before, to never allow horrors of the past to take place again. ...read more.