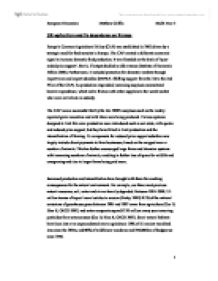 UK agriculture and its dependence on Europe.

UK agriculture and its dependence on Europe Europe's Common Agricultural Policy (CAP) was established in 1962 driven by a strategic need for food security in Europe. The CAP created a deliberate economic signal to increase domestic food production. It was founded on the basis of 'open-ended price support', that is, if output doubled so did revenue (Institute of Economic Affairs 2000). Furthermore, it included protection for domestic markets through import taxes and export subsidies (DEFRA- Shifting support from the 1st to the 2nd Pillar of the CAP). As production responded, increasing surpluses necessitated heavier expenditure, which led to friction with other suppliers to the world market who were not reliant on subsidy. The CAP was so successful that by the late 1980's surpluses such as the widely reported grain mountains and milk lakes were being produced. Various systems designed to limit this over-production were introduced such as set-aside, milk quotas and reduced price support, but they have failed to limit production and the intensification of farming. To compensate for reduced price support subsidies now largely include direct payments to farm businesses, based on the cropped area or number of animals. This has further encouraged large farms and intensive systems with increasing numbers of animals, resulting in further loss of space for wildlife and overgrazing and also in larger farms being paid more. Increased production and intensification have brought with them far-reaching consequences for the natural environment. ...read more.

(DEFRA- Shifting support from the 1st to the 2nd Pillar of the CAP). The Department for the Environment, Food and Rural Affairs (DEFRA) accepts the need for a shift in support for farmers from production subsidy (1st pillar) towards stewardship and provision of public benefits and other measures through the RDR (2nd pillar). Agenda 2000 permits member states to voluntarily divert direct payments from the 1st to the 2nd pillar, a process known as modulation, however whilst agreement is for up to 20 % the UK Government's plans are for only 4.5% by 2006. There is now increasing EU advocacy for compulsory modulation, which would be advantageous for Britain to support to ensure a level playing field between EU states. Speciality, local and organic sectors have grown rapidly in recent years and in 2000 65% of households made an organic purchase, up from 37% two years before. However with only 3% of UK farmland managed organically and with only 1% fully certified to date, imports account for 75 % of the market (DEFRA- Shifting support from the 1st to the 2nd Pillar of the CAP). Although the numbers of organic farmers increased following the launch of the Organic Aid Scheme in 1995, the amount of land in the UK is well below that found in other European countries partly because the UK is the only country in Europe that does not support its organic farmers post-conversion. ...read more.

Conclusions Clearly there are many issues such as arable and livestock proportions, the type of agricultural intensification (essentially arable or intensive livestock production), differing landscapes, number of small farmers and country's identity that will affect the method of chosen agricultural reform delivery. Added to this there are a number of existing differences such as agri-environment schemes with Tir Gofal in Wales, the Rural Stewardship Scheme in Scotland and Countryside Stewardship in England. All will develop in different ways but the rationale for and the basis of reform across the UK as well as the rest of Europe must be the same. I feel the reform will help prepare the European Union for enlargement to the East and pave the way for forthcoming negotiations in the World Trade Organisation leading to greater liberalisation of agricultural trade. They will also reduce EU farming's dependence on market price support, opening up the industry to greater competitiveness and helping to deflect the pressure for tighter controls over production. The environment will benefit from reduced reliance on market price support. British farming will best flourish and make its contribution to society under a CAP which encourages farmers to produce in response to the demands of the market within the context of fair conditions of competition and taking account of legitimate concerns about the environment. A more liberalised CAP will also help the industry to become more competitive and prepare for the challenges which further trade liberalisation and EU enlargement will pose in the early years of the next decade. ...read more.