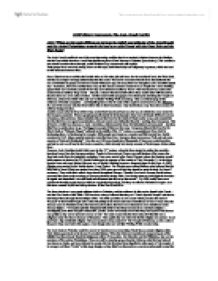 &quot;What are the main differences between the beliefs and attitudes of the Jews/Israelis and the Arabs/ Palestinians towards the land now called Israel with the Gaza Strip and the West Bank?

GCSE History Coursework- The Arab- Israeli Conflict AO1: "What are the main differences between the beliefs and attitudes of the Jews/Israelis and the Arabs/ Palestinians towards the land now called Israel with the Gaza Strip and the West Bank? The Arab- Israeli conflict is one of the most interesting conflicts that have strained relations between the Muslims and the Jews which involves a small but significant piece of land known as Palestine (Israel today). This conflict is not rooted in modern times though, as this section of my coursework will explain. Both groups have extremely strong views on this topic, both historically and religiously important, which has lead to this stalemate between them. Some Historians have said that the Jewish claim to Palestine (the old name for the combined Israel, the West Bank and the Gaza strip) is stronger historically than the Arabs. We need to remember that the Jews first settled in the area of Palestine in groups of Hebrews around 4000 years ago and set up their own kingdom and a beautiful capital city - Jerusalem, but it was cruelly taken away by the Roman Invaders around 63 AD. ...read more.

The main reason why the Jews today feel that this was a religious centre for them is because of Jerusalem. This capital city was where the Jewish religion was nurtured and grew into a big worldwide religion. They are anxious to keep control of The Temple of Solomon, as it is a relic to the power they once had in this region- even though only one wall (the Wailing Wall) remains today. The Arab claim to Palestine could be seen to be based more on ownership of land than an actual religious claim. Their history goes back to the dawn of recorded history. When the Hebrews invaded and conquered parts of the Middle East they already found the indigenous tribes of Canaanites, the Edomites and the Philistines, who are the ancestors of the modern Palestinians. They were still a minority group when the Hebrews ruled the land when it was known as Judea, and were allowed to remain after the Jews had been dispelled to other parts of the empire. It is wrong to call them "Arabs" at this stage though, as they didn't see themselves as one true nation until around the 7th century when the new religion of Islam was brought to them. ...read more.

There seems to be less and less political extremist enemies to a peace deal. Yasser Arafat, a leading member of the P.L.O used to believe that "the goal of our struggle is the end of Israel, and there cannot be any compromises or mediation", but by 1993 he had signed a peace deal with the Israeli Prime Minister Rabin. No doubt that there would be anger amongst his own side for signing a deal which he had decided in 1974 not to sign any at all. Overall it is important to realise that there are a range of attitudes in each side in the conflict, and will never agree which is the best way to gain all the land from the other sides. They both have moderates who are willing to co-operate with each other to create permanent peace between themselves, yet they will risk assassination attempts by their own side- as in the case of President Nassar of Egypt in 1981, and Prime Minister Rabin in 1995. But whatever the attitudes within the group they will all have the same belief - that they are the ones who should own 100% of the land, as they have historical and religious claims in the conflict. ...read more.