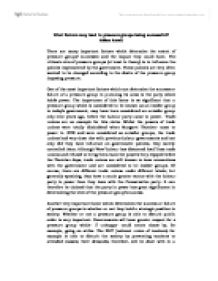 What factors may lead to pressure groups being successful?

What factors may lead to pressure groups being successful? Abbas Ameli There are many important factors which determine the extent of pressure groups' successes and the impact they could have. The ultimate aim of pressure groups (at least in theory) is to influence the policies implemented by the government. These policies are very often wanted to be changed according to the desire of the pressure group imposing pressure. One of the most important factors which can determine the success or failure of a pressure group in pursuing its aims is the party which holds power. The importance of this factor is so significant that a pressure group which is considered to be known as an insider group to today's government, may have been considered an outsider group only nine years ago, before the Labour party came to power. Trade unions are on example for this claim. Whilst the powers of trade unions were totally diminished when Margaret Thatcher came to power in 1979 and were considered as outsider groups, the trade unions had very close ties with previous Labour governments and not only did they have influence on government policies, they merely controlled them. ...read more.

The pressure group Fathers For Justice (F4U) on the other hand, does not benefit from a strategic position; its demands are therefore aired by the government. But of course, other factors such as media attention can alter the way the government looks at a pressure group such as F4U. One other main factor determining the success of pressure groups is public opinion towards pressure groups. If people have affection for a pressure group and support their cause, the pressure group will be more successful in pushing forward its agenda, and vice versa. The union for nurses is an example of this case. The condition in which nurses work and the way their occupation is viewed, can bring up public support when nurses need it. Finance is another important factor which can cause the success or failure of a pressure group. Money is widely known to be power. It is no exception for pressure groups. Groups can often use their wealth in order to influence political parties and those in power to pursue their aim. ...read more.

Campaigns which are held close to election times could face much greater success than usual. Politicians would like to gain the support of as many people as they could possibly manage, and would therefore try to fulfil the demands of the campaigning pressure groups. Organisation also has great role in determining the success or failure of a pressure group. Pressure groups should have reliable sources for their finance, a suitable network for recruiting members and accurate plans which would help them pursue their goals. Amnesty International is a great example of a well organised pressure group. They have 1.8 million members in 170 countries and have managed to carry many of their campaigns with great success in many of these countries. It is clear, that suitable organisation is required to have such achievements. Whether or not a pressure group faces fierce opposition through government and/or other pressure groups and whether or not there is a clash of interests is a also an important factor in determining the success or failure of a pressure group. The anti-smoking lobby for example faces opposition by big Tobacco companies and it is therefore more difficult for them to achieve their aims. ...read more.