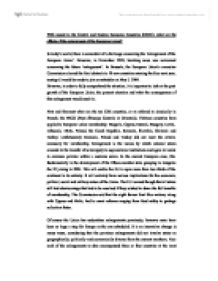 With regard to the Central and Eastern European Countries (CEEC), what are the effects of the enlargement of the European Union?

With regard to the Central and Eastern European Countries (CEEC), what are the effects of the enlargement of the European Union? In today's world, there is somewhat of a challenge concerning the 'enlargement of the European Union'. However, in November 2003, breaking news was welcomed concerning the future 'enlargement'. In Brussels, the European Union's executive Commission cleared the final obstacle to 10 new countries entering the bloc next year, saying all would be ready to join on schedule on May 1, 2004. However, in order to fully comprehend the situation, it is important to look at the past growth of the European Union, the present situation and what the consequences of this enlargement would result in. First and foremost what are the ten CEE countries, or as referred to classically in French, the PECO (Pays d'Europe Centrale et Orientale). Thirteen countries have applied to European Union membership: Bulgaria, Cyprus, Estonia, Hungary, Latvia, Lithuania, Malta, Poland, the Czech Republic, Romania, Slovakia, Slovenia and Turkey. Unfortunately Romania, Poland and Turkey did not meet the criteria necessary for membership. Enlargement is the means by which national states concede to the transfer of sovereignty to supranational institutions and agree to invest in common policies within a customs union. In the current European case, this fundamentally is the development of the fifteen-member state grouping to integrate the 10 joining in 2004. This will enable the EU to span more than two-thirds of the continent in its entirety. ...read more.

These partnerships are subject to regular review and updating. The success of the candidate in implementing its partnership and other preparations is subject to an annual report by the commission. Also, with regard to meeting the economic criteria for membership, it can be seen that on the basis of GDP per head of population, the CEEC's are at a low level of prosperity compared with the present member states' average. For example, Hungary has a GDP of approximately 51% of the EU average, while Poland's is approximately 37%. These are two of the 'Luxembourg' candidates as well; who represent the stronger economies amongst the candidates. When Ireland joined the EU in 1973, GDP was up to 60% of the average Member State and that was frowned upon by many at that time. The big question in this instance for the CEEC's is whether or not they can convince the EU that their economies can face up to the competitive pressures after entering the Union. They will be expected to do this without lengthy transition periods and without permanent derogation. The financial questions that play on the minds of all parties concerned are numerous, such as, how can the enlargement to the East be financed without increasing EU spending beyond the currently planned limit of 1.27 per cent of the member states' GDP, and how are the present net recipients of structural funds to maintain their share under these conditions? ...read more.

The new members will little add to the EU aid effort. It might focus the EU's attention on East and Southeast Europe, and on some post-communist recipients like Vietnam or Laos. In foreign and security policy, the enlargement might strengthen the forces within the EU that favour a closer partnership with the USA in global affairs and a stronger military role for the EU abroad. Generally, the EU will be become more preoccupied with the management of its own affairs as its internal diversity increases at the same time as it levels its internal playing field (internal market, common currency, Convention). To conclude, the enlargement facing the EU today poses a unique challenge, since it is without precedent in terms of scope and diversity: the number of candidates, the area (increase of 34%) and population (increase of 105 million), the wealth of different histories and cultures. Third countries will significantly benefit from an enlarged Union. A single set of trade rules, a single tariff, and a single set of administrative procedures will apply not only just across the existing Member States but also across the Single Market of the enlarged Union. This will simplify dealings for third-country operators within Europe and improve conditions for investment and trade. The addition of 10 member states is the largest amount to date and will certainly involve dealing with numerous issues, some of which have been mentioned above, however, further political and economical issues will be raised in due course and questions regarding Turkey will also be raised. Concerning said enlargement; it will have numerous benefits that will be further expressed after May 2004. ...read more.