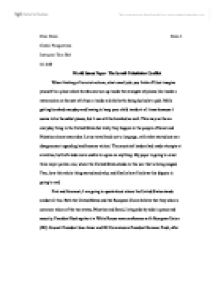 World Issues Paper- The Israeli-Palestinian ConflictWhen thinking of terrorist actions, what exactly do you think of? Just imagine yourself in a place where

Peter Pentz Pentz 1 Global Perspectives Instructor Tom Belt 11-1-05 World Issues Paper- The Israeli-Palestinian Conflict When thinking of terrorist actions, what exactly do you think of? Just imagine yourself in a place where bombs can turn up inside the strangest of places like inside a watermelon on the seat of a bus or inside a drink bottle being hurled at a pub. Malls getting bombed everyday and having to keep your child inside at all times because it seems to be the safest places, but it can still be bombed as well. This may not be an everyday thing in the United States but lately they happen to the people of Israel and Palestine almost every day. Let us travel back not to long ago, with what started out as a disagreement regarding land became violent. The countries' leaders had made attempts at armistice, but both sides were unable to agree on anything. My paper is going to cover three major points: one, where the United States stands in this war that is being waged. Two, how this whole thing started and why, and finally how I believe this dispute is going to end. First and foremost, I am going to speak about where the United States stands amidst all this. ...read more.

The history of Israel records times when the Jews were taken into exile and their land abandoned or given into the hands of others. Even before the time of Jesus a Pentz 3 great issue among Jews was how to deal with Samaritans, those who came to live in Palestine while the Jews were in exile. Following the fall of the Jewish state in the first century, Jews dispersed through the known world, retaining their identity wherever they settled. Palestine was taken in turn by the Moslems, liberated by Crusaders, and reverted to local rule during intervening centuries. Then came the Zionist movement, a humanitarian response to the pogroms Jews had experienced for centuries, followed by the creation of the modern state of Israel. So, in a nutshell, the problem is two groups with different but legitimate claims to the same land. And neither side is behaving particularly well. Both sides have arguments to back their claims. The Israelis argue that they were in that land since ancient times and that it is their ancestral home. Also, they site the Torah and Bible which claims that Israel is the eternal home of the Jewish people. From the start of the Zionist movement, their goal was to migrate into Palestine as much as possible. ...read more.

Many tried and none succeeded because both end point were deep inside the knot and if you didn't know where to start then how could you finish, until Alexander the Great arrived. He stared at the knot for a while and cheated the oracle by cutting the knot with his sword instead of untying it. Zeus honored his initiative by making the prophecy come true. Alexander did indeed conquer all of Asia. What does this have to do with the Israel and Palestine conflict? Well both countries have tried to reach an agreement and have not be successful in doing so and there is no one who can help them reach an agreement. They are the princes and the Pentz 5 land is the knot. In my opinion, another country is going to come in and say "you know what the land is mine" and he is going to take it and start the third world war. In conclusion, I have spoken about where the United States government stands in this predicament, how it started, and how I believe it will end. There are several theories but I stand by mine the most because it to me it seems rational and very likely of occurring, the only thing is the consequences that may come after that happens because both countries as we know have no problem committing terrorist acts. ...read more.