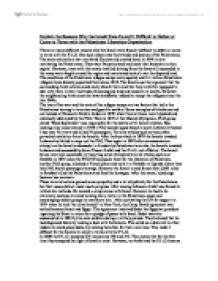 This agreement involved Sadat the Egyptian president regaining the Sinai in return for a pledge of peace with Israel. Sadat was later assassinated in 1981 by his own soldiers during a military parade. They believed that he had disgraced Islam by making a deal with the Israelis. This acted as a deterrent to other leaders to avoid peace deals, by making them fear for their own lives. This made it difficult for the Israelis to come to terms with the P.L.O. In 1988 the P.L.O. accepted UN resolutions 238 and 242. This means that for the first time they accepted the right of Israel to exist. However, as Arafat and the P.L.O. became more moderate in a search for peace, more extreme groups have come to being such as Hamas and Hizbollah. These groups have caused new problems in the search for peace. They carry out regular attacks on Israeli soldiers and civilians. This put Arafat in difficult positions where he would promise that there would be no more attacks and Hamas would carry out an attack leaving him looking out of his depth. ...read more.

Secondly I believe it shows the way in which the Israeli state is unwilling to give any concession to the Palestinians, and that they would only ever consider such a move under great pressure from the outside world or America, their great friends, shown by Bill Clinton. In conclusion, the main reasons why the Israeli state found it difficult to defeat or come to terms with the P.L.O. are * A fear of assassination after a compromise is made * The new found Palestinian desire to return to their homeland * The terrorist tactics and guerrilla warfare used by the P.L.O. * The change in world opinion after the Intifada * The troubles caused by extremist new groups * The consequent hard-line politicians becoming more vocal * The hatred between the peoples The biggest question mark though remains over Yasser Arafat and whether or not he can be trusted. The Israelis do not know for sure whether he truly believes in co existing with Israel or whether he is secretly encouraging bombers behind closed doors in order to gain more. Deals have been done with Arafat because he seemed the best hope for peace. This remains still to be seen. ...read more.