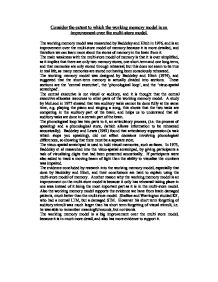 Consider the extent to which the working memory model is an improvement over the multi-store model.

Consider the extent to which the working memory model is an improvement over the multi-store model. The working memory model was researched by Baddeley and Hitch in 1976, and is an improvement over the multi-store model of memory because it is more detailed, and therefore we can learn more about the stores of memory in the brain from it. The main weakness with the multi-store model of memory is that it is over simplified, as it implies that there are only two memory stores, one short-term and one long-term, and that memories are only stored through rehearsal, but this does not seem to be true in real life, as many memories are stored not having been consciously rehearsed. ...read more.

A study by McLeod in 1977 showed that two auditory tasks cannot be done fully at the same time, e.g. playing the piano and singing a song, this shows that the two tasks are competing in the auditory part of the brain, and helps us to understand that all auditory tasks are done in a certain part of the brain. The phonological loop has two parts to it, an articulatory process, (i.e. the process of speaking) and a phonological store, (which allows information to be rehearsed acoustically). Baddeley and Lewis (1981) found that articulatory suppression (a task which stops you speaking), did not affect decisions involving phonological differences, so showing that there must be a separate store. ...read more.

Another reason why the working memory model is an improvement on the multi-store model is because it only has rehearsal taking place in one area instead of it being the most important part as it is in the multi-store model. Also the working memory model supports the evidence we have from brain damaged patients, much better than the multi store model. Shallice and Warrington studied KF, who had a normal LTM, but a damaged STM. However his short term forgetting of auditory stimuli was much larger than his short term forgetting of visual stimuli, i.e. he was able to remember meaningful sounds, but not words. The working memory model is a big improvement over the multi store model, because it is in much more detail, and also has more evidence to support it. ...read more.