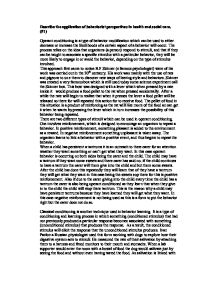 Describe the application of behaviorist perspectives in health and social care. (P1) Operant conditioning is a type of behavior modification which can be used to either decrease or increase the likelihoods of a certain aspect of a behavior will occur. The process relies on the idea that organisms (a person) respond to stimuli, and that if they can be taught to associate a specific stimulus with a particular behavior, they will be more likely to engage in or avoid the behavior, depending on the type of stimulus involved. This approach first came to notice B.F Skinner (s famous psychologist) were of his work was carried out in the 20th centaury. His work was mainly with the use of rats and pigeons to us e them to discover new ways of leering style and behaviors. Skinner was created a very famous box which is still used today some science experiment call the Skinner box. This bow was designed with a lever which when pressed by a rate inside it would produce a food pellet to the rat when pressed accidentally. After a while the rate will begin to realize that when it presses the lever a food pellet will be released so there for will repeated this action for to receive food. The pellet of food in this situation is a product of reinforcing as the rat will like more of the food an can get it when he wants by pressing the lever which in turn increases the possibility of this behavior being repeated. There are two different types of stimuli which can be used in operant conditioning. One involves reinforcement, which is designed to encourage an organism to repeat a behavior. In positive reinforcement, something pleasant is added to the environment as a reward. In negative reinforcement something unpleasant is taken away. The organism learns to link a behavior with a positive event, and thus begins to repeat the behavior. ...read more.

Sigmund Freud also developed a theory called psycho sexual theory. This theory explains why certain individuals have a sexual desire for a particular part of their body at that precise stage but if the need of a childe is accounted for at each developing stage a child will move onto the next stage to develop further. On the other hand if the needs of a child in earlier developing stages are not met sufficiently and there is a conflict this can lead them from developing a fixation behaviour which can continue during the adult hood stages. He states form what stage child has been weaned to have an effect on there developing behaviours. Erickson was also a psychologist that agreed with most of Freud's theorist approaches as he believes that we develop as individuals through a serious of conflicts. He believe that through our life's development these conflicts learned in earlier stages will still have an effect on us in later life s that continue through. Although he believed in Freud's approach in this theory he also though that He put to much emphasis on the individual gratification of needs but put to little emphasis on the fact that an individual will have a need that of trying to be accepted as a part of society in order to lead a meaningful life. His theory was based on psychosocial crisis and hade five stages. These stages were:- * Trust Vs basic mistrust * Autonomy Vs shame and doubt * Initiative Vs guilt * Industry Vs inferiority * Identity Vs role confusion Trust Vs basic mistrust The infant is entirely dependent and relies completely on others to meet its needs and provide good physical and emotional care. If the parenting need of the infant is being met the infant will learn a sense of trust. After some time Self-confidence would develop and the infant would see the world to be a dependable and predictable place. ...read more.

He did this by monitoring children during specific activities and noting on the mistakes they made. The test he carried out were on children within the same age rang and without considering intelligence to begin with. He then came to a conclusion that cognition development show development through several serious of stages each building on things learned forms the former stage. He came up with four stages which were:- The sensori-motor stage The pre-operational stage The concrete operational stage The formal operational stage The sensori-motor stage at this stage a child can only experience things through immediate perception so what they see is what they believe in. for example if there parent leaves the room and the child cannot see them then they do not have the ability to think that they still exist. A child will become to an end of this stage when they begin to use memory and language. The pre-operational stage This stage a child will begin to use thinking skills and have the ability to use wider language thought and memory. They will also hold a view that the ego is the center, object, and norm of all experience. They will not be able to understand concept such as object being the same but have a different shape. The concrete operational stage Children will now have the ability to be able to conserve they will be able to identify that objects can be the same even though they done share the same molded. For example two different shaped glasses put share the same amount of volume. The formal operational stage The child now develops the ability to conserve They are now able to recognize that certain objects are the same regardless of how they are molded The child can still only deal with concrete objects and cannot represent problems in abstract form Psychology of Personal Constructs This was theory invented by George Kelly in 1955. He set out to replace the models of the person adopted by behaviorism. Kelly focused on the individuals thought and how they come to understand their own experience and made sense of them. ...read more.