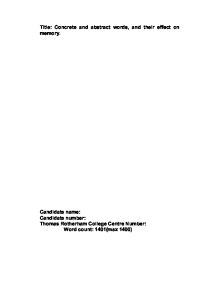 Title: Concrete and abstract words, and their effect on memory. Candidate name: Candidate number: Thomas Rotherham College Centre Number: Word count: 1401(max 1400) Abstract I aimed to find out whether participants recall concrete or abstract words more easily. I used 20 participants in a lab experiment, giving each participant a word list with 10 concrete words and 10 abstract words. After recording which words the participant recalled correctly, I found that 4.65 participants remembered abstract words more effectively than the 4.15 who remembered concrete more effectively. The inferential analysis using Wilcoxon T established that my results were not significant. From this I can conclude that the use of abstract or concrete words has no real effect on the participants memory. Background Bower (1972) investigated using imagery to assist memorisation. Participants in the experiment were asked to memorise pairs of unrelated words. The experimental group was asked to visualise an image of the pair of words they were trying to memorise - whereas the control group was just asked to memorise the words. The results showed that the experimental group showed significantly better recall of the of words and that the more unusual the images were, the better the recall. ...read more.

* Data recording sheet. * Standardised instructions (word processed). * Standardised debrief (word processed Procedure The study was conducted in the LRC - which provided a quiet environment so participants would be able to concentrate. The first 10 available males were tested and the first 10 available females were tested. After a participant had agreed to take part in a study investigating memory, they were then given a slip of paper which had the standardised instructions on it. When participants had agreed to take part in the investigation, they were given the sheet with the 20 words on it, and the stopwatch was started. After 1 minute, the participants were told their time was up and asked to pass back the word sheet. They were then given a blank sheet of paper and a pen (if they needed one) and told they now had 1 minute to write down as many words from the sheet that they could recall. The stopwatch was then started again, and again after one minute had passed the participant was told that their time was up and that the investigation was now over. The participant was then debriefed by giving them a sheet with a standardised debrief on it. ...read more.

Discussion Psychological context Bower had found that if participants could visualise a word, then they would be more likely to recall it. However, in my experiment the participants recalled abstract words more effectively although I had expected that it would be more difficult to memorise an abstract word rather than a concrete one. Thus, my experiment would disagree with the results obtained in the one by Bower. Methodology A strength of my research would be the controls I used. For example, I ensured I used a standardised procedure for all participants to prevent unfair advantages - this will have improved the reliability of my research. As participants generally did not perform particularly well on my memory test - the average score being 40% correct -then this could indicate that a weakness of my research could be that I underestimated the difficulty of the memory task. An improvement here could be to construct the word list by using 'easier' words, or to allow a longer amount of time that the participants have to memorise the words. I would expect this to improve the average recall of words. Validity - low scores, not accurate measure of memory. ...read more.