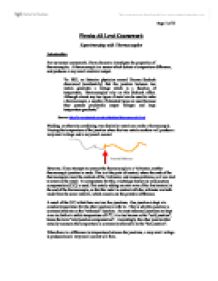 For my sensor coursework, I have chosen to investigate the properties of thermocouples.  A thermocouple is a sensor which detects a temperature difference, and produces a very small electrical output.

“In 1822, an Estonian physician named Thomas Seebeck discovered (accidentally) that the junction between two metals generates a voltage which is a function of temperature. Thermocouples rely on this Seebeck effect. Although almost any two types of metal can be used to make a thermocouple, a number of standard types are used because they possess predictable output voltages and large temperature gradients.”

Welding, or otherwise combining, two dissimilar metals can make a thermocouple. Varying the temperature of the junction where the two metals combine will produce a very small voltage and a very small current.

However, if one attempts to connect the thermocouple to a Voltmeter, another thermocouple junction is made. This is at the point of contact, where the ends of the thermocouples meet the contacts of the Voltmeter, and causes problems, as it can lead to errors in the result.  To compensate for this, a technique known as cold junction compensation (CJC) is used. This entails adding an extra wire of the first material at the end of the thermocouple, so that the metal in contact with the voltmeter are both made from the same material, which cancels out the potential difference.

A result of the CJC is that there are two free junctions.  One junction is kept at a constant temperature for the other junction to refer to.  That is why this junction is commonly known as the “reference” junction.  As most reference junctions are kept in an ice bath at a stable temperature of 0 o

As thermocouples produce such a small current, a standard ammeter would not be inadequate.  A Moving-Coil Galvanometer is sensitive enough to measure the current accurately, and can be calibrated beforehand to get an accurate relationship between temperature difference of junctions and current produced. Ideally a digital Galvanometer would be used for improved accuracy.

This is the safest method of heating up water, compared to using a Bunsen burner (open flame hazard).  It is also cheaper than using a water bath, although unlike its more advanced counterpart, it cannot maintain a user-defined temperature.

These are safer to use than glass/Pyrex beakers, as polystyrene is a good insulator, reducing the chance of injury from handling the beakers, which contain hot substances.  Being a good insulator also reduces the rate at which the ice will melt, so I can continue the experiment for longer.  One polystyrene beaker will be used to contain the hot water for the “hot junction”, while the other will contain the ice for the “cold junction”.

The basic instrument for measuring the temperature of the water.  Cheap but reliable and accurate, the thermometer must be read at eye level for accuracy. Can operate between 0 oC and 100 oC, well within my parameters for my experiment.  Ideally a digital thermometer would be used for greater accuracy.

This has two purposes.  Firstly, it is required to construct an ice bath for the “cold” reference junction.  Secondly, it can be used as a coolant if the water is taking to long to cool by itself, a situation which can occur if the ambient room temperature is higher than average.  Being crushed gives the ice a larger surface area, which allows a larger surface area of the thermocouple junction to remain in contact.

A practical example for use of a thermocouple is in an old style boiler.  When the pilot light (essentially a flame) is turned on, it heats up one junction of the thermocouple. This produces a small current, which is used as feedback to keep the pilot light alight.

From my experiments, I can see that there are some drawbacks, however.  In Copper-Constantan thermocouples, the smallest temperature change that can be sensed is 1 oC.  In some precision measuring applications in industry, this may simply be not accurate enough for the task at hand, such as monitoring a sick person’s body temperature in a hospital, for example, as this would deal in looking at changes in temperature in 0.1 oC.

Also, it appears that a rapidly changing temperature would cause problems.

http://www.picotech.com/applications/thermocouple.html - A company specialising in the manufacture, research and development of a wide range of thermocouples.

http://www.madsci.org/posts/archives/oct99/939333814.Ph.r.html - An excellent overview of thermocouple theory on the atomic level.

http://www.its.org - The International Thermoelectric Society, a vast resource of information on all thermoelectric effects, which included thermocouple theory.

Heinmann Advanced Science: Physics by Patrick Fullick – General listing of common sensors along with advantages and disadvantages of thermocouples.

Physics Tutor for advice on experiments and technical support.

[1] Ideally I would measure the temperature in Kelvin, starting from absolute zero. Unfortunately, this is impossible to recreate in a school lab environment.

[3] Also known as the “reference junction”, this junction remains at a fixed temperature, usually 0 oC.