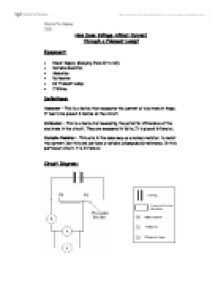 Through a Filament Lamp?

Ammeter - This is a device that measures the current of electrons in Amps. It has to be placed in Series on the circuit.

Voltmeter - This is a device for measuring the potential difference of the electrons in the circuit. They are measured in Volts. It is placed in Parallel.

Variable Resistor - This acts in the same way as a normal resistor, to resist the current, but this one can have a variable (changeable) resistance. In this particular circuit, it is in Parallel 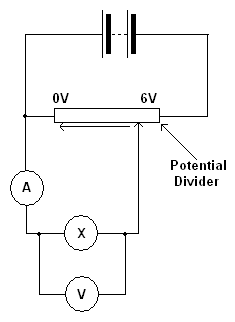 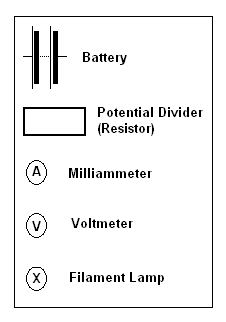 Through experimenting, I have found out about how the current increased as the voltage increased. However the rate of increase slowed down after around 3.

The experiment could be improved in a couple of ways, one being the amount in which the voltage was increased by. For example, the voltage would still range from 0V to 6V but instead of having 0.5V intervals you could have 0.25V. You could also do more repeat readings, so the average result was more exact.

Different lamps with different voltage limits could be used. E.g. the lamp used in my experiment had a limit of 6V, instead of this you could try a 2V or 20V lamp.

You might try using a larger amount of lamps. E.g. have a circuit that included 4 or 5 lamps and seeing how this affected the resistance, if at all.

As long as it was done safely, you could try going beyond the limit of the lamp. E.g. going to 6.5V or 7V on a 6V lamp and finding out what happened then.

No. I predicted a straight line on the graph. But looking at the graph and thinking about what happened during the experiment, it makes sense why the graph would show and upward curve.