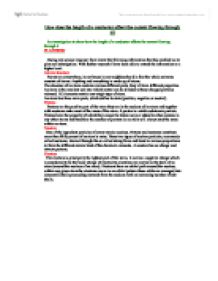 How does the length of a conductor affect the current flowing through it?

How does the length of a conductor affect the current flowing through it? An investigation to show how the length of a conductor effects the current flowing through it PLANNING During my science lessons I have learnt the following information that has enabled me to plan my investigation. With further research I have been able to extend the information to a higher level. Atomic structure Atoms are everywhere; in our house in our neighbourhood in fact the whole universe consists of atoms. Anything and everything is made up of atoms. The structure of an atom contains various different parts, they all have different properties. An atom is the smallest unit into which matter can be divided without charged particles released. All elements contain one single type of atom. An atom has three main parts, which define its state (positive, negative or neutral). Protons Protons are the positive part of the atom they are in the nucleus of an atom and together with neutrons make most of the mass of the atom. A proton is a stable subatomic particle. Protons have the property of which they cannot be taken away or added to other protons in any other atoms and therefore the number of protons in an atom will always stay the same within an atom. Neutron One of the ingredient particles of every atomic nucleus, Protons and neutrons constitute more than 99.9 percent of an atom's mass. ...read more.

Although my method was quite good I think I should have completed more repeats of the experiment at closer intervals making sure that I have a reliable set of results for great accuracy. For immense accuracy a much more accurate voltmeter and ammeter could have been engaged into the experiment (for example a computer controlled voltmeter and ammeter). One of my results at the 80cm mark on the voltage field gave a higher reading than the 85cm mark, which shouldn't have happened. I think this happened because there was a point in the circuit which was resisting the current flow and therefore gave a higher reading. Overall I think my result were to a good standard because the points on the graphs gave a smooth line contour. There were few points that could have been changed to show a variation of results for further examination , starting off with the wire material- different materials could have been used to show what effect they have on the circuit and to give a good idea of how different materials act in the experiment. Secondly the diameter of the wire could have been altered to see what effect the change has on the circuit. Thirdly more tests should have been carried out over a different length span. One more thing, a brand new battery could have been used for every repeat to make it even more accurate. How does the length of a conductor affect the current flowing though it? Mohsan Mahmood 10s ...read more.