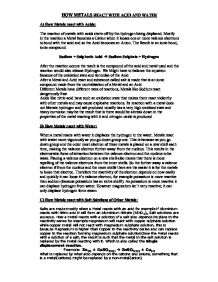 How metals react with Acids

HOW METALS REACT WITH ACID AND WATER A) How Metals react with Acids: The reaction of metals with acids starts off by the hydrogen being displaced. Mostly in the reaction a Metal becomes a Cation when it looses one or more valence electrons to bond with the acid and so the Acid becomes an Anion. The Result is an ionic bond, ionic compound. Sodium + Sulphuric Acid --> Sodium Sulphate + Hydrogen After the reaction occurs the result is the compound of the acid and metal used and the reaction would also release Hydrogen. We Might have to balance the equation because of the oxidation state and formulae of the Acid After a Metal and Acid react and substance called salt is made that is an ...read more.

forming magnesium sulphate solutionOnce the Metal reacts with a solution of a salt, the result is such that the metal in the salt solution is replaced by the metal reacting with it. Which is also called the Single displacement reaction. Example: Zn(s) + CuSO4(aq) --> ZnSO4(aq) + Cu(s) What is replaced by what also depends on the cations and anions, something that is a metal(cations) might be replaced by a non-metal(anion) We Can see in this Reaction that Bromine that is a metal(Cation) is replaced by Chlorine non-metal(Anion) Example : Cl2 + 2NaBr � 2NaCl + Br2 The Ions that are left after a reaction and have not been reacted with anything are called spectators, This is because they might not be soluble in the solution made ...read more.