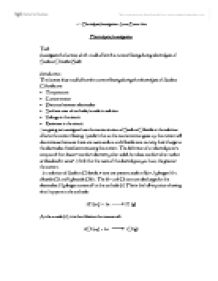 The factors that could affect the current flowing during the electrolysis of Sodium Chloride are:

I am going to investigate how the concentration of Sodium Chloride in the solution affects the current flowing. I predict that as the concentration goes up, the current will also increase because there are more sodium and chloride ions to carry their charge to the electrodes therefore increasing the current. The definition of an electrolyte is ‘a compound that doesn’t conduct electricity when solid, but does conduct when molten or dissolved in water’. I think that the more of the electrolytes you have, the greater the current.

In a solution of Sodium Chloride, 4 ions are present; sodium Na+, hydrogen H+, chloride Cl- and hydroxide OH-. The H+ and Cl- ions are discharged at the electrodes. Hydrogen comes off at the cathode (-). This is the half-equation showing what happens at the cathode:

Taking the range of 8 readings 4 times.

One of the safety precautions I will take is to make sure that I wear safety glasses while doing the experiment.

I decided that, to get an idea of what kind of results I was aiming to get from my main investigation and to identify any problems I might encounter, I performed roughly the same experiment as described above, I set the equipment up as shown below:

The major difference between the main investigation and my preliminary work was that I measured out the amount of salt for the solution by spatulas. I measured the current with 0-12 spatulas of salt dissolved in distilled water. From this I decided that measuring by mass was more accurate, but here I only wanted to get a rough idea. The results of my preliminary work are shown below:

I performed the experiment as outlined in the plan. Because in my preliminary work, I had already highlighted and found solutions for any possible problems, I did not encounter any during the final investigation.

From my graph, it is clear that the results increase in a curve.  Trials 1 and 4 are generally above average and trials 2 and 3 are generally below average. My results for 8g of sodium chloride appear to be anomalous, as they don’t fit into the curve. My results from my preliminary also indicate that the results should form a curve. My prediction is supported by my results because as the concentration increases, so does the current. My results also show that the increase in current between 0g and 2g of salt is substantially greater than the difference in current between 12g and 14g of salt. This would suggest that the solution is becoming saturated and more full of sodium and chloride ions, so the increase is reduced.

I think that my experiment was very effective and I proved my prediction to be true. Although I had some anomalous results, the general trend in my results was clear. The test could have been fairer if I had used the same distilled water for each trial, and just added 2g of salt for each level. I would like to try the experiment using the same water for each trial, to see whether it makes any difference.