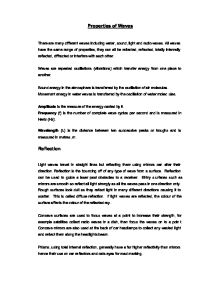 There are many different waves including water, sound, light and radio waves. All waves have the same range of properties, they can all be reflected, refracted, totally internally reflected, diffracted or interfere with each other.

Waves are repeated oscillations (vibrations) which transfer energy from one place to another.

Amplitude is the measure of the energy carried by it.

Frequency (f) is the number of complete wave cycles per second and is measured in Hertz (Hz).

Wavelength (λ) is the distance between two successive peaks or troughs and is measured in metres, m.

Light waves travel in straight lines but reflecting them using mirrors can alter their direction. Reflection is the bouncing off of any type of wave from a surface.  Reflection can be used to guide a laser past obstacles to a receiver.

Angle of reflection (r): The angle between the normal and the reflected ray.

Angle of incidence (i): The angle between the normal and the incident ray.

When light passes from one transparent material to another it changes in speed.  If light passes from air to glass it slows down, as glass is denser than air. The change in speed causes the light to bend.  All waves refract if they change speed, for example water waves change speed as the water becomes shallow causing them to change direction.

One problem in any optical communication systems is the spreading out (diverging) of a beam of light waves as it travels through a medium.   This results in a very weak signal, which cannot be sent far.  To overcome this problem of divergence convex lenses are used to bend (refract) the light into a beam, which does not spread out.  This is called collimation.   The beam can also be focussed onto a receiver so the signal is stronger using a convex lens.

Interference is a problem in radio if two radio stations broadcast using radio waves of the same wavelength and frequency.  To prevent different people broadcasting on the same wavelength radio stations are allocated frequencies to broadcast on.  One of the problems with pirate radio is due to it interfering with other radio waves in broadcasting and more dangerously communication in the emergency services.

Though the candidate attempts to introduce this piece of writing, they have failed to make it clear that they plan to discuss each of the key properties stated. The introduction of an essay should also be used to briefly introduce ...

Though the candidate attempts to introduce this piece of writing, they have failed to make it clear that they plan to discuss each of the key properties stated. The introduction of an essay should also be used to briefly introduce your key topic and to engage the reader, which you can do by stating an interesting fact or quote related to your chosen topic. In addition to this the candidates overall response ranges from fairly basic to a that of an average A-level student. For example the first few sentences contain very basic knowledge and the candidate fails to expand upon this. However their discussion of other wave properties gives much more detail and is of a higher standard. It is often a good idea to write out a plan before typing up an essay, that way, you can think about what topics you want to discuss and make sure that you give enough information for each.

The candidate provides a suitable amount of detail from some of the wave properties discussed, however they do not develop these ideas. Therefore they could have improved the quality of their work by linking together other areas of physics such as the polarisation of waves and its uses. This would show a broader understanding of A-level physics topics and can make the essay more interesting to read. In addition to this, the candidate has failed to write a conclusion, which is a mistake. A conclusion is necessary as it allows you to tie up any loose ends and draw your essay to a close. You should summarise your key points and ideas, and try to a give a personal response to your topic, this will help to leave the reader with a good impression.

The layout of this piece of writing is a little unclear and appears jumbled, it would be easier to follow if the candidate had discussed the wave properties of amplitude, frequency and wavelength in a written a paragraph, this would make the information clearer and easier to read. In general it is clear that the candidate has a reasonably good understanding of the physics topics discussed, though they sometimes fail to use appropriate scientific terms, for example the candidate discusses superposition but does not use the actual term. You should always check over your work and make sure you use scientific terms where appropriate. That said there are no real issues with spelling or grammar.