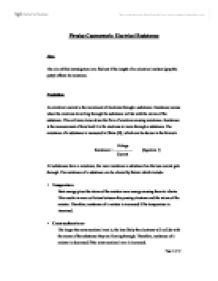 The electrons have to travel a longer distance if the length of the resistor is increased. More collisions will occur between the electrons and the atoms of the substance. Therefore, an increase in length results in an increase in resistance.

I predict that a longer resistor will give higher resistance.

As stated in the plan, except that we did not have time to repeat Method 2 three times.

The following are the steps we took to make the investigation safe:

The following are the steps we took to ensure that the investigation was fair:

Table 2 in the next page summarizes the results of Method 1 where currents passing through the resistor were measured. For each length, we have included the three individual readings, the calculated average of the three readings, the predicted result as derived in Table 1, and the percent deviation comparing our experimental result to the prediction.