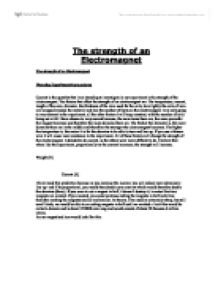 
Using the current in the coils, you would be able to re-align some of the domains. If you did this and as a result more of the domains were pointing in the same direction, then the iron would have become a weak magnet.

When you switch off the current, the domains would return back to a random set up. Obviously, if you were to line more domains up, the magnet would become much stronger, until you were to reach a state where you had aligned all the possible domains up.

Apparatus used: An electromagnet, power pack, variable resistor, ammeter, wire, paper clips and an electric balance. The following diagram is how we set the experiment up:


To measure the strength of the electromagnet, I turn on my power pack, set at 6 volts, so as not to blow the fuse of the power pack, as many of my fellow experimenters did. I then, after setting my current using the variable resistor, dipped the magnet into a pile of paper clips, then dropped the paper clips away from the pile, by turning off the pack.

but if I did I would have obtained the levelling off zone because a few other people doing the experiment achieved this prematurely at a lower voltage than expected. If I wanted to make some improvements to the experiment, I would take the results five times, and to a greater degree of accuracy of current and weight loss (four decimal places or more). We also could have tried to keep
the temperature more constant by not leaving the current on between the takings of readings and leaving it to cool. We should also have zeroed the balance before taking each reading. To extend the investigation I could have tried varying the number of coils (which I also did), or another factor, keeping the current constant, then another variable and comparing the results of varying those others, such as different metals used for the core, e.g. soft or hard. I could also have tried using iron filings for an example to see if different results were given.