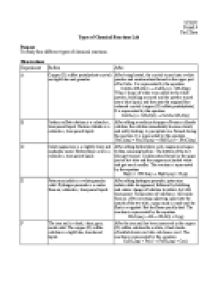 ﻿SCH3U Period 4 Carl Zhou Types of Chemical Reactions Lab Purpose To study four different types of chemical reactions. Observations Experiment Before After A Copper (II) sulfate pentahydrate crystals are light blue and granular. After being heated, the crystals turned into a white powder and condensation formed in the upper part of test tube. It is represented by the equation CuSO4?5(H2O)(s) ? CuSO4(s) + 5(H2O)(g) When 5 drops of water were added to the white powder, bubbling occurred and the powder turned into a blue liquid, and then into the original blue coloured crystals (copper (II) sulfate pentahydrate). It is represented by the equation CuSO4(s) + 5(H2O)(l) ? CuSO4?5(H2O)(s) B Sodium sulfate solution is a colourless, transparent liquid. Barium chloride is a colourless, transparent liquid. After adding a medicine dropper of barium chloride solution, the solution immediately became cloudy and milky looking. A precipitate was formed during the reaction. It is represented by the equation BaCl2(aq) + Na2SO4(aq) ? BaSO4(s) + 2NaCl(aq) D Solid magnesium is a slightly shiny and malleable metal. Hydrochloric acid is a colourless, transparent liquid. After adding hydrochloric acid, magnesium began to fizz, releasing bubbles. ...read more.

The precipitate ions cannot re-dissolve in the mixture so they are rapidly removed from the solution. Double displacement is represented by the equation AB + CD ? AD + CB or (in the case of the lab) BaCl2(aq) + Na2SO4(aq) ? BaSO4(s) + 2NaCl(aq) Experiment D demonstrated a single displacement reaction/exothermic reaction. The reaction occurred when hydrochloric acid was added to solid magnesium. Since Mg is higher than H on the activity series (more reactive), therefore Cl ions are more attracted to Mg ions and will leave H to bond with Mg. Mg is more reactive than H because it has two electrons in its valence shell, these two electrons are easily lost because they are far from the nucleus (compared to that of H) so there is less attraction, resulting in low ionization energy (energy needed to remove electrons) . Magnesium must lose its outer electrons in order to react. Hydrogen has one valence electron and it is closer to the nucleus (compared to that of Mg) so there is more attraction, resulting in higher ionization energy. Therefore it is easier for Mg to react (lose electron) compared to H. ...read more.

Experiment F is a single displacement reaction/precipitate reaction. The reaction occurred when iron and copper (II) sulfate came into contact. Since Fe is higher than Cu on the activity series, therefore SO4 molecules are more attracted to Fe ions and will leave Cu to bond with Fe. The precipitate created is copper, which collects on the nail. Single displacement reaction is represented by the equation A + BC ? AC + B or (in the case of the lab) CuSO4(aq) + Fe(s) ? FeSO4(aq) + Cu(s) Errors 1. After heating copper (II) pentahydrate, we did not allow the test tube to cool down fully before adding water. When water was added it began to boil and evaporate. This could have changed our results because we do not know if the evaporation took away substances from the test tube, so some substances that should be there may be missing. This will give us inaccurate results. 2. We may have handled the magnesium strip and the iron nail for too long. Contaminants on our skin such as oils or other chemicals could become residue on the magnesium and iron and react in the experiment, which would give us inaccurate results (shouldn't have happened). 3. There were people walking by the bunsen burner. The wind that their movement created may have affected the temperature of flame and thus the results. ...read more.