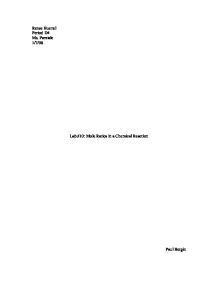 Mole Ratios in a Chemical Reaction

Renee Buettel Period D4 Ms. Parziale 1/7/08 Lab #10: Mole Ratios in a Chemical Reaction Paul Bergin Abstract The main objective of this lab experiment was to balance the given chemical equation and to find the correct mole-to-mole ratio of it. The theoretical balanced equation was Pb(NO3)2(aq) + K2Cr2O7(aq) --> PbCr2O7(s) + 2KNO3(aq). In addition, the ratio of moles was one to one.and the correct mole-to-mole ration was one to one. The experimental results matched this ratio. The theory that was proven was that balancing equations give the correct mole ratio of a chemical equation. Introduction In a chemical equation, there are two sides. The chemicals on the tail end are called the reactants and the chemicals on the other side are called products. An example of this given by Coefficients (2008) is 2H2 + O2 --> 2H2O. In this example, "2H2 + 02" is the reactants and "2H2O" is the product. Also, "-->" is the sign for "yield." The big 2s in front of H2 and H2O are called coefficients. In this case, the first 2 indicates that there are 2 molecules of H2, which also means that there are 4 atoms of hydrogen in the reactant part of the equation. The other 2 signifies that there are 2 molecules of H2O as the product. ...read more.

with K2Cr2O7 to form PbCr2O7(s) + KNO3(aq). Another objective of the lab is to learn how to balance equations. The correct mole ratio of the compounds is one to one because when the equation is correctly balanced out, it is Pb(NO3)2(aq) + K2Cr2O7(aq) --> PbCr2O7(s) + 2KNO3(aq). The well ratio of reactants that should result in the most product will be well 5 because the balanced equation has the ratio one to one, and well 5 has 5 drops of lead nitrate and 5 drops of potassium dichromate, which simplifies to 1 to 1. Methods 1) Obtain about 10 mL of K2Cr2O7(aq),and about 10mL of Pb(NO3)2(aq). (These amounts do not have to be exact, but should be close so as not to waste any of these solutions later.) 2) Using micropipettes as droppers, mix the two reagents by mixing drops according to the table #1 below. Mix the two reactants in the wells of the microchemistry plates. Be certain to use the line of wells near the edge of the plate such that you can see the results easily. NOTE - the wells are numbered on the plate and should correspond to the data table 3) For each well, mix WELL with the microspatula after adding the reagents. (Remember to clean off spatula after each stirring so as not to mix extra reactants not accounted for by well#) ...read more.