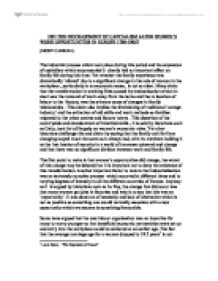 Did the development of capitalism alter women's work opportunities in Europe 1780-1900?

DID THE DEVELOPMENT OF CAPITALISM ALTER WOMEN'S WORK OPPORTUNITIES IN EUROPE 1780-1900? (NICKY CARROLL) The industrial process which took place during this period and the expansion of capitalism which accompanied it clearly had an important effect on family life during this time .Yet whether the family experience was dramatically 'altered' due to a significant change in the role of women in the workplace , particularly in an economic sense, is not so clear. Many claim that the transformation in working lives caused by mechanisation which in short saw the removal of work away from the home and the re location of labour to the factory, was the primary cause of changes in family relationships . This claim also implies the diminishing of traditional 'cottage industry' and the extinction of old skills and work methods as families migrated to the urban centres and factory towns . This desertion of the countryside and abandonment of inherited skills , it is said by historians such as Cetty, took its toll largely on women's economic roles. Yet other historians challenge this and claim by saying that the family unit far from changing stayed much the same as it always had, with its members holding it as the last bastion of security in a world of immense upheaval and change and that there was no significant division between work and family life. ...read more.

It is also a general observation that although women had a place in the textile industries they were slowly displaced by the increasingly important 'heavy ' industries such as iron and steel. Textiles remained crucial obviously, but what does it say for women's work opportunities if they were excluded from such an important sector of industry. The textile industry was itself not always the most stable of areas to work in , as we have begun to see. We can take the "war of ribbons" in the Saint Chammond area studied by Accampo, as illustrative of this and shows us the restriction rather than the advancement of women's opportunities that occurred. "Ribbon production had fallen to one tenth of the size of the trade of Saint Etienne "4 Here the competition between the two towns significantly reduced women's work opportunities as this traditional trade suffered due to the increasing competition , an inevitable characteristic of capitalism. If we look at some of the trade s which grew up to replace the ones that had started to decline we can again see that the role for women was not always a positive one. Let us take nail making as our example, women rarely were given training in the new skills necessary so, in a repeat of the situation we have seen already with the introduction of the high loom, it was lack of skills which restricted them. ...read more.

We should also take into account that woemn held the same jobs often until they died without progressing to any position of higher authority ("women continued to work well into their seventies and eighties or until they died")8 No matter how much their wages increased or even stabilised it was always given to the family economic unit , no matter how hard they worked and no matter how harsh their lives became they never relinquished their obligation to their familiy. It seems that their spending power was never increased nor were they ever given any chance to exercise any financial independence.It was not until the later stages of capitalist development that women's roles underwent some changes with an increase in the number of white collar workers being the impetus for this change.However this only came about with the expansion of government and bureauracracy which neede women to work as the secretaries and clerks. Yet during the nineteenth century capitalism was not so refined and it was women who were to suffer because of this. 1 Louis Henry - "The Population of France" 2 Ansley J Cole and T. James Trussell p.203 -211 3 Accampo- Industrialisation , Family Life and Class Relations p64. 4 Accampo - Industrialisation , Family Life and Class Relations, p33 5 Scott and Tilly - p69 6 Audiganne -Population Ouvrieres p198 7 J Valserres - TheIndustry of the Loire 8 Accampo p85 ...read more.