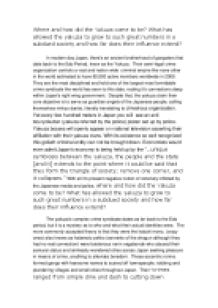 Where and how did the Yakuza come to be? What has allowed the yakuza to grow to such great numbers in a subdued society and how far does their influence extend?

﻿Where and how did the Yakuza come to be? What has allowed the yakuza to grow to such great numbers in a subdued society and how far does their influence extend? In modern day Japan, there's an ancient brotherhood of gangsters that date back to the Edo Period, know as the Yakuza. Their semi-legal crime organization controls a vast and nation wide criminal empire like none other in the world estimated to have 80,900 active members worldwide in 2009. They are the most disciplined and hold one of the largest most formidable crime syndicate the world has seen to this date, rooting it's connections deep within Japan's right wing government. Despite that, the yakuza claim their core objective is to serve as guardian angels of the Japanese people, calling themselves ninkyo dantai, literally translating to chivalrous organization. Yet every few hundred meters in Japan you will see an anti bouryokudan (yakuza referred by the police) poster set up by police. Yakuza bosses will openly appear on national television asserting their affiliation with their yakuza clans. With its existence so well recognized this goliath criminal entity can not be brought down. Economists would even admit Japan's economy is being held up by the "...unique symbiosis between the yakuza, the people and the state [and it] extends to the point where it could be said that they form the triangle of society; remove one corner, and it collapses." ...read more.

As large groups of them gathered together they would at times organized themselves into groups to operate activities such as loan sharking. In contrary to the illegal business of the bakuto, the tekiya were by definition legal, yet they often times engaged in illegal vending, distributing contraband goods across the countryside. They had a shady reputation for selling faulty goods and their means of selling were typically deceptive. It was with the tekiya that they created the relation of oyabun-kobun (father role and child role), a strict code laid down by the gang to obey the hierarchy, that remains a prominent feature of the yakuza culture today. The members at the bottom are to strictly obey the orders or the oyabun and it needed were to be ther bosses' teppoudama (rifle bullet) terminating their target. Marked as the lowest of society, discriminated as scums, both the tekiya and the bakuto had a lot in common. Regarding this, it isn't too hard to understand why they joined hands to emerge as the undisputed lords of Japan's underworld; the misfits' match made in hell was the start of a seemingly endless partnership that would go on to change the face of Japanese organized crime. The bakuto and tekiya would go on to take over Japan's underworld and on the eve of the twentieth century they were pretty much the modern yakuza we know today. ...read more.

on national television discussing why the yakuza won't fade in this country (http://www.youtube.com/watch?v=9e65hdtYtio). Plus, the fact that the yakuza being the single largest criminal entity in the world, in a country slightly smaller than the state of California, has one of the world's lowest violent crime rates in the first word is just staggering. Given this huge population that it is not under the rule of countries? rules, a set of rules and or a set custom is needed to keep this 80,000 strong organization functional and in order. In recent years "Japanese government recently pledged to crack down[on the yakuza], reversing a longstanding policy of tolerating the Yakuza. However, the yakuza syndicates enjoy extensive influence in the business community, and the Yamaguchi-gumi has ties to some of Japan's biggest companies, including Olympus and TEPCO. The Yamaguchi-gumi also is an important backer of the Democratic Party of Japan, which heads the government's ruling coalition." We know it works, as we see them run itself every single aspect. The yakuza claims they are part of something bigger then themselves, and this helps them live strictly by a code. The structure of the yakuza are simple and their members very homogenous. All members are Japanese males. Their codes of bushido that represents honour and respect guided the yakuza to stay loyal to their masters even during police "crackdown" years, and the organization will survive very far in the future. ...read more.