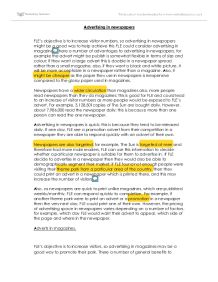 Advertising in newspapers and magazines

Advertising in newspapers FLE's objective is to increase visitor numbers, so advertising in newspapers might be a good was to help achieve this FLE could consider advertising in magazines. There a number of advantages to advertising in newspapers, for example the advert might be publish is somewhat flexible in terms of size and colour; if they want a large advert this is doable in a newspaper spread rather than a small magazine, also, if they want a black and white picture, it will be more acceptable in a newspaper rather than a magazine. Also, it might be cheaper as the paper they use in newspapers is inexpensive compared to the glossy paper used in magazines. Newspapers have a wider circulation than magazines also, more people read newspapers than they do magazines; this is good for FLE and could lead to an increase of visitor numbers as more people would be exposed to FLE's advert. For example, 3,128,501copies of The Sun are bought daily. ...read more.

time and the images are sharper with more brilliant colours, this is an advantage as it catches the customers' eyes and overall, the advert appears to be more appealing. This means if FLE were to advertise in magazines, they could include pictures of their main rollercoasters, so their customers can see the actual attractions and this should help them attract more visitors. There are a number of other advantages to advertising in magazine. PPA researched that customers are more likely to find magazine adverts to be more 'acceptable', 'useful' and 'enjoyable' compared to other advertising in the media. This is probably because adverts in magazines are not a disruption to the readers enjoyment, and the reader has the option to turn the page over if they feel the advert does not interest them. Also, magazines are made to target a specific audience, and if FLE segment their market and advertise their theme park in the right magazine which is likely to be read by their target audience, the chance that the reader would be interested in the advert, which should help increase visitor numbers. ...read more.

If FLE were to advertise in magazines then, according to the research, there is more chance the customer will welcome the adverts and if they enjoy the advert, there is more chance of them taking action and visiting the theme park. IPC claims that advertising in magazine will make the company a lot of profit, they say the long term ROI will return be �2.77 if �1 is invested into advertising in magazines, whilst only �1.79 will be returned if the same amount, �1, is investing into advertising in other outlets. This is good for FLE as they might be able to make a bigger profit when advertise through magazine outlets, and hopefully be able to focus their budget on other things which may help to increase visitor numbers. The IPC claim that magazines are seen 'more credible' by those who read them than any other medium. This could be good for FLE as they want their customers to trust what they say and find their information reliable. If FLE build better relations with their customers, it could result in visitor numbers increasing. ?? ?? ?? ?? ...read more.

Good evidence of research into print advertising but there could be much more application to the particular case of FLE. It is too general. A recommendation would be good for a specific magazine or paper