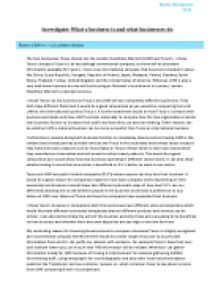 Investigating a business and what business do - London Heathrow Marriott (LHM) and Tescos.

﻿Maha Humayune 10-B Investigate: What a business is and what businesses do The two businesses I have chosen are the London Heathrow Marriott (LHM) and Tesco?s. I chose Tesco?s because Tesco?s is an exceedingly conventional company, so there will be abundant information available for Tesco?s. Tesco is an international company that has stores situated in place like China, Czech Republic, Hungary, Republic of Ireland, Japan, Malaysia, Poland, Slovakia, South Korea, Thailand, Turkey, United Kingdom and the Unites States of America. Whereas, LHM is also a very well-know business but we will be focusing on Marriott?s local branch in London, London Heathrow Marriott a national business. I chose Tesco?s as my business as Tesco?s and LHM are two completely different businesses. They both have different fields and it would be a good comparison as you would be comparing the local LHM to the international business Tesco?s. A further statement would be how Tesco?s increases their business worldwide and how LHM functions nationally to compare how the two organisations handle their business further to increase their profit and how they use decision-making. Other reasons can be whether LHM a national business can be more successful than Tesco an international business. Furthermore; reasons being both business function in completely diverse sectors having LHM in the tertiary sector because they provide services and Tesco in the secondary and tertiary sector because they have their own products such as Tesco Value or Tesco?s finest which is their own brand which they manufacture themselves and sell as well as other brand products. This would be a good comparison as it would show how two business operating in different sectors work. It can also show whether being in more than one sector is beneficial or if it is better to work in one sector. Tesco and LHM are public limited companies (PLC?s) where anyone can buy into their business. It would be a good reason for comparison based on how each company works depending on their ownership and because it ...read more.

The countries where Tesco can be found are the following ?Mainland China, Czech Republic, Hungary, Republic of Ireland, Japan, Malaysia, Poland, Slovakia, South Korea, Thailand, Turkey, United Kingdom and United States.?(1) The fact that Tesco is known worldwide shows that it provides high quality products and that they are making a good profit. Tesco is the number one retailer in the UK and the supermarket leader in the world. But, two other supermarkets in the UK are trying to compete to become number one. One of them, Asda, is the UK?s second grocery retailer behind Tesco due to them offering low prices to customers. Tesco offers a club card, which has now become the world?s most successful retail loyalty scheme. This shows that Tesco is willing to build a personal relationship with its consumers whereas Asda does not do this and only lower their prices once in a while. The third largest supermarket after Tesco and Asda is Sainsbury?s. They compete with them because their online services make it easier for customers to actually purchase their groceries. Tesco and Asda also have online services for their customers, which are very successful. Online shopping is the new way to shop and this is obvious because all three of the major supermarkets have now acquired official websites, which you can purchase goods off. The chart below shows Tesco and its two main competitors and other small ones. Tesco?s competitors and their services are listed below: Tesco ASDA Sainsbury?s Morrison?s Purpose Mission statement: ?Creation of value for customers to enable them and earn their lifetime loyalty.? This is based on the fact that success depends on people especially the ones who shop with them and also the ones who work with them. They achieve this by regularly asking customers and staff to point out areas of improvement. (38) Mission statement: ?To be Britain's best-value retailer exceeding customer needs always.? (39) ...read more.

What went well? I think my presentation was very good during this activity. I believe that this was the easiest part of gaining easy marks as you mainly had to be consistent with your presentation all the way through your work. I made sure that I had the same font and size throughout my work to make it look neat and so the examiner won?t get confused on what I am writing. I made my font size eleven; this is because I know this size is not too big or not too small, this will make it easier for the examiner to read without hesitating. I also used the same font-Calibri-as it is simple to read so it would have been easier for me to read when I was checking over my work. I also separated each section into paragraphs by giving them clear headings and along the way I even added sub headings to make sure it was easy to identify on what I was trying to discuss. As I have written in a lot of detail about certain points, I thought that it would be useful to separate each point into sub headings, as sub headings allow me to expand and go into depth about the heading. By separating each point into paragraphs, it will give the examiner the impression that I am talking about one particular topic in each section, so he/she will know when I am about to begin a new topic when I have started my new paragraph. My presentation was consistent throughout my controlled assessment, for example, I have only used the colours black and blue. The headings were written in blue as it stands out and the examiner will know when I am about to write the next segment. Using the colour black will also make it easier for the examiner as it is not too bright to frustrate the examiner?s eyes. These two colours contrasted well as it is clear to see when I was beginning my new point of a different section. Another way my clear presentation can be seen is through my bibliography. ...read more.