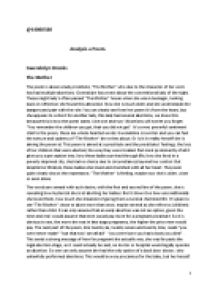 ﻿@14060560 Analysis a Poem. Gwendolyn Brooks The Mother The poem is about a lady prostitute, ?The Mother? who due to the character of her work has had multiple abortions. Gwendolyn has wrote about the conventional lady of the night, Theses night lady?s often passed ?The Mother? house when she was a teenager, looking back on reflection she found this attractive. Now she is much older and she understands the dangers and pain with the role. You can clearly see from her poem it?s from the heart, but she appears to write it for another lady, this lady had several abortions, we know this because this is how the poem starts. Line one and two ?Abortions will not let you forget. ?You remember the children you got, that you did not get?. It?s a very powerful sentiment start to the poem, these are whole-hearted words. Gwendoline is a writer and you can feel the torture and sadness of ?The Mother? she writes about. Or is it in reality herself she is aiming the poem at. This poem is aimed at a prostitute and the prostitutes? feelings, the loss of her children that were aborted, the way they were treated. But most prominently of all it gives you a perception into, how these ladies survived through life, how she lived in a poverty deprived city, she had no choice due to circumstances beyond her control. ...read more.

The lady in this poem portrays herself as a "Mother", yet it is visible through the lines of the poem that she was never actually a "Mother?. She floats into reality and imagination of motherhood, and what would have been. She speaks as a ?Mother? with sheer admiration for all her children. She shows so much remorse for the sordid acts her life gave her, nevertheless no matter how life came crashing around her she speaks as a ?mother? of her unrequited love and passion for each and every one of her ?unborn children?. The line ?Abortions will not let you forget?, this sends a very strong message that this ?Mother? has never disregarded what she did to her children. She lives each and every day with the deepest and darkest remorse, line 6 and 7 ?you will never neglect or beat them?, ?them, or silenced them with sweets. If we look deeper into this line, it seems that maybe she was beaten as a child and bought with sweets, to silence what she saw. Line 11 illustrates how she could not bring herself, to say she had killed her children? I have heard the voices of my dim killed children? dim is used as her denial as to her abortion. It?s hard to put into context what stage of her life she is at in this poem, she imagines the lost children still exist , she envisages herself giving birth, she visualizes feeding them all through her breast, even hearing her children?s voices. ...read more.

But it?s the only life she knew, and she knew with all her heart, that the decision was right to abort the children. She didn?t want them having a life like hers, too live like she did, she knew in her decision no matter how heart wrenching it was, she made the choice to abort so her children could be saved from the dark and dangerous world that awaited them. The ending of the poem it shows us the person ?The Mother? really was it reads ?believe me, I loved you all. ?Believe me, I knew you, though faintly, and I loved, I loved you?. ?All?. She telling her children that despite everything, whilst she was pregnant she made bonds with these children, she cradled her belly, she spoke to them and soothed just a normal mother would, she could have named each one of them. The last word is ?All? she knew it was ?All? her fault and she never denies this, her life added to the abortion decision, she loved them? All? each and every one of them. All is, ?HER ALL? which were her children, and even though they didn?t survive the abortion they lived on in her memory forever. She was a mother right up until that fateful day, when her children were taken from her, and I really do think that with each child?s death a piece of ?The Mother? died too. ...read more.