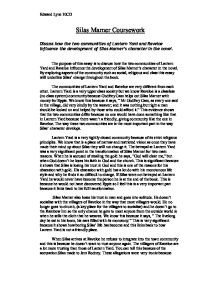 Discuss how the two communities of Lantern Yard and Raveloe influence the development of Silas Marner's character in the novel.

We know this because it says, " The livelong day he sat in his loom, his ears filled with its monotony." This is very significant because it shows how boring Silas' life has become and this links back to how Lantern Yard is not a friendly place. When Silas arrives at Raveloe he refuses to integrate into the town community and this is because he doesn't want to trust anyone again. The villagers of Raveloe are a lot more trusting than those of Lantern Yard. You can tell this because of the accusation Silas made to Jem Rodney. These allegations were very ironic because Silas was also accused of stealing gold but in contrast to the events at Lantern Yard the allegations were dropped because of no evidence. This is significant because it shows how the people of Raveloe are more trusting than those of Lantern Yard. This evidence is very important to Silas' transformation because when he drops the case against Jem Rodney you know he is softening a bit. ...read more.

When he arrived in Raveloe he was lonely and boring but since his transformation he is caring and kind. Since Eppie's arrival Silas has been released from the clutch of his gold and he is open to new ideas. Silas has a great change in religious and social beliefs since Eppie's arrival. He has started going back to church and now sees his betrayal at Lantern Yard as being god sent because without it he would never have moved to Raveloe and found Eppie. Since Eppie's arrival Silas has been fully accepted and approved into the community. Everyone there respects him for taking in Eppie and realises what a good thing he has done. Villagers such as Dolly and Godfrey Cass have been very helpful towards raising Eppie by giving money and clothes. This evidence is significant because it shows Silas' full acceptance into the community. I think that Silas going back to Lantern Yard is the final part of his transformation for him. He realises how lucky he was to escape the community that the place has now become. A factory has replaced the church and in general the place is not as not nice as it was. ...read more.