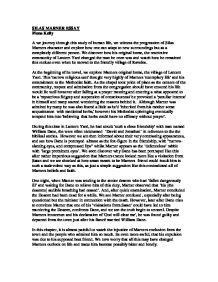 SILAS MARNER ESSAY Fiona Kelly A we journey through this study of human life, we witness the progression of Silas Marners character and explore how one can adapt to new surroundings but as a completely different person. We discover how his original home, the restrictive community of Lantern Yard changed the man he once was and watch how he remained this recluse even when he moved to the friendly village of Raveloe. At the beginning of he novel, we explore Marners original home, the village of Lantern Yard. This 'narrow religious sect' thought very highly of Marners 'exemplary life' and his commitment to the Methodist faith. As the chapel took pride of place as the centere of the community, respect and admiration from the congregation should have ensured his life would lie well however after falling at a prayer meeting and entering a what appeared to be a 'mysterious fidgety and suspension of consciousness' he provoked a 'peculiar interest' in himself and many started wondering the reasons behind it. ...read more.

In this chapter, it is almost painful to watch the injustice of Marners exclusion from the town and the people who admired him so much. Its even more awful, that his expulsion was due to his supposed best friend. We now worry that all this may have changed Marners outlook on life and make him become possibly bitter and lonely. Raveloe lies "in the rich central plain of what we are pleased to call merry England" with its pleasant, relaxed decriptions of "orchards looking lazy" and "purple-faced farmers jogging". In contrast to Lantern Yard, religion in Raveloe seems a somewhat more sical activity, with the "Power.. In prayer meetings (being) very far away". However, after the previos betrayal, Marner possessed "little light" thus he buries himself in his work However, the village, being 'not over-wise or clever' assumed hard work 'could be carried on entirely' with the help of the 'Evil One' and therefore were rather wary of him. Another feature or Marner that the villagers found rather odd was learning about his knowledge of certain herbs after he cured a local inhabitant. ...read more.

The Industrial Revolution had meant the original picturesque surroundings were now used only as land for factories. The obvious irony used throughout this chapter contradicts the towns title, Lantern Yard, which gives us an idea of a bright, happy place. We are informed about the 'grim walls of the jail' and the 'sallow begrimed face' of many a child peeping out from 'gloomy doorways' and begin to realise that the place Marner's looking for no longer exists, and the people he once new have long since moved on. So unfortunately, Marner never receives the closure he so wished for. The general message of this novel appears to lie mainly on fate, and how there are always reasons behind every thing that occurs in our lives. If Silas hadn't have been wrongly accused in Lantern Yard, he wouldn't have moved to Raveloe and found Eppie, and maybe wouldn't loved anything or anybody quite as much during his entire life. Throughout the novel, we can really understand and maybe relate to how Marner feels at the injustice of what happened, however it helps us understand how our surroundings really can effect our overall outlook on life. ...read more.