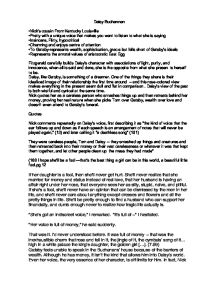 Daisy Buchannan � Nick's cousin From Kentucky Louisville � Pretty with a unique voice that makes you want to listen to what she is saying � Insincere, Flirty, hypocritical � Charming and enjoys centre of attention � To Gatsby-represents wealth, sophistication, grace but falls short of Gatsby's ideals � Represents the amoral values of aristocratic East Egg Fitzgerald carefully builds Daisy's character with associations of light, purity, and innocence, when all is said and done, she is the opposite from what she presents herself to be. Daisy, like Gatsby, is something of a dreamer. One of the things they share is their idealized image of their relationship the first time around - and this rose-colored view makes everything in the present seem dull and flat in comparison. ...read more.

She'll never realize that she married for money and status instead of real love, that her husband is having an affair right under her nose, that everyone sees her as silly, stupid, naive, and pitiful. If she's a fool, she'll never have an opinion that can be dismissed by the men in her life, and she'll never care about anything except dresses and flowers and all the pretty things in life. She'll be pretty enough to find a husband who can support her financially, and dumb enough never to realize how tragic life actually is. "She's got an indiscreet voice," I remarked. "It's full of -" I hesitated. "Her voice is full of money," he said suddenly. That was it. I'd never understood before. It was full of money - that was the inexhaustible charm that rose and fell in it, the jingle of it, the cymbals' song of it... ...read more.

It had gone beyond her, beyond everything. He had thrown himself into it with a creative passion, adding to it all the time, decking it out with every bright feather that drifted his way (87). Analysis: The description of Gatsby's dream matches the description of everything he does, from his parties to his automobile to his suits. Nick points out that the real Daisy cannot possibly live up to the imagined Daisy, something Gatsby never admits. It's like the time I took my kids to the Grand Canyon. I had pictured in my mind a glorious day in the world's most popular national park. It turned out to be a day of blistering heat, crying children, and annoying tourists. I feel your pain, Jay. I feel your pain. That's because your mother wanted to show you off." (104). Analysis: Daisy brings out her daughter, not because she loves her, but because she wants to show her off. To Daisy, everyone is an object. ...read more.