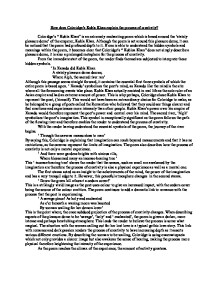 How does Coleridge's Kubla Khan explain the process of creativity?

How does Coleridge's Kubla Khan explain the process of creativity? Coleridge's " Kubla Khan" is an extremely enchanting poem which is based around the 'stately pleasure dome' of the emperor, Kubla Khan. Although the poem is set around this pleasure dome, it can be noticed that the poem had profound depth to it. If one is able to understand the hidden symbols and meanings within the poem, it becomes clear that Coleridge's " Kubloa Khan" does not simply describe a pleasure dome, it is also a prolonged metaphore for the process of creativity. From the immediate start of the poem, the reader finds themselves subjected to interprete these hidden symbols. ' In Xanadu did Kubla Khan A stately pleasure dome decree; Where Alph, the sacred river ran' Although this passage seems straight forward, it contains the essential first three symbols of which the entire poem is based upon. ' Xanadu' symbolises the poet's mind, as Xanadu like the mind is the site where all the forecoming events take place. Kubla Khan actually exsisted in real life as the sole ruler of an Asian empire and had an extreme amount of power. This is why perhaps, Coleridge chose Kubla Khan to represent the poet, ( himself). This would not have been an extraordinary choice for Coleridge to make, as he belonged to a group of poets called the Romantics who believed that they could see things clearer and feel emotions and experiences more intensely than other people. ...read more.

' Huge fragments vaulted like rebounding hail, Or chaffy grain beneath the thresher's flail: And 'mid these dancing rocks once and ever It flung up momently the sacred river' The poet explains how the in the height of his experience imagination moves everything. The ' fragments', ' grain' and ' rocks' all symbolise ideas and are shown to be triggered off to become active by imagtination . The poet uses a clever method of enhancing the power of imagination by describing huge boulders and rocks in the river to be moved by the river like virtually weightless matter such as hail and grain. This makes the reader aware of how ideas are uncontrollably processing in the poet's mind by the imagination. When the climax finishes, so does the poet's enthusiasm and excitement. ' Five miles meandering with a mazy motion Through wood and dale the sacred river ran, Then reached the caverns measureless to man, And sank in tumult to a lifeless ocean' Coleridge uses alliteration when describing the meandering, mazy motion of the river as it slows the poem down to a slower tempo. This is very efficient as it suits the new mood of the poem. In using words such as ' meandering', ' mazy' and ' sank', the process is gradually loses its life and fast pace. The previous series of active events have tired out the poet, as the process was both extremely demanding both mentally and physically, thus the poem reflects the exhausted behaviour of the poet. ...read more.

The poem ends with the poet's prediction of his destiny. ' Weave a circle round him thrice, And close your eyes with holy dread, For he on honey-dew hath fed, And drunk the milk of paradise' Social rejection is the unjust consequence of Coleridge's passion for creativity. As he explains, people will fear him and treat him differently. Many Romantic poets also experienced this treatment as it was considered unusual in that time period for men to be in touch with their emotions and therefore Romantic poet's were viewed as perculiar. Coleridge uses " Kubla Khan" to show the reader how the process of creativity works and what it can acheive. The process of creativity orginates in one's mind, when imagination is triggered off by inspiration. The process is amazingly powerful and both mentally and physically tiring and it's results, like the pleasure dome of Xanadu are remarkable. Coleridge uses many clever techniques such as alliteration, methaphores, onamatapeia, comparisons and hidden symbols to emphasise the impact and intensity of the process of creativity. Coleridge also structures his poem to suit the style of his poem. The first stanza, gives an insight in to what it to come and what can be acheived by the process of creativity and acts as a sort of introduction for the process. The second stanza is extremely detailed and lively and shows the actual process of creativity. The third stanza almost defends Coleridge's work and ends the poem with the message that no-one could ever understand let alone feel the Coleridge's experiences in the way that he can and does. ...read more.