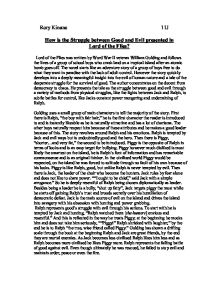 How is the Struggle between Good and Evil presented in Lord of the Flies?

Rory Kinane 11J How is the Struggle between Good and Evil presented in Lord of the Flies? Lord of the Flies was written by Word War II veteran William Golding and follows the lives of a group of school boys who crash land on a tropical island after an atomic bomb goes off. The novel starts like an adventure story of a group of boys free to do what they want in paradise with the lack of adult control. However the story quickly develops into a deeply meaningful insight into the evil of human nature and a tale of the desperate struggle for the survival of good. The author concentrates on the decent from democracy to chaos. He presents the tale as the struggle between good and evil through a variety of methods from physical struggles, like the fights between Jack and Ralph, to subtle battles for control, like Jacks constant power mongering and undermining of Ralph. Golding uses a small group of main characters to tell the majority of the story. First there is Ralph, "the boy with fair hair," he is the first character the reader is introduced to and is instantly likeable as he is naturally attractive and has a lot of charisma. The other boys naturally respect him because of these attributes and he makes a good leader because of this. The story revolves around Ralph and his emotions. Ralph is tempted by Jack and evil ways but is undoubtedly good and the hero. ...read more.

This shows how as evil creeps into the island democracy and rules become less and less relevant until they are destroyed completely by evil, embodied in this case by Roger. The fire represents man's inability to control nature. The fire is used to cook meat and to try and signal for a rescue. However as savagery increases the fire is not used as a signal, it is used only for cooking meat. This shows how some of the boys give up on civilisation and loose hope of it coming back. In the end the hunters try to use the fire to kill Ralph. Ironically this act of pure destruction and chaos leads to the resurrection of society on the island through the arrival of the rescue boat. Simon and Roger represent two ends of a scale in the book. Golding has used Roger as a representation of true evil while using Simon as a Jesus like pure good character. Both are loners with few friends and stay outside the group but when it is involved in good things, like building huts, Simon joins in. As the island descends into savagery Roger not only joins in but also becomes as powerful as Jack "wielding a nameless authority." Of course as Simon is the representation of good he is destroyed by evil. Roger as the representation of evil not only helps to destroy Simon, but also murders Piggy. These two characters also help to define the decent into savagery. ...read more.

However they all still cling to civilisation, for a while at least, as at the beginning none would attack another without justification. As the island changes the boundaries are pushed so far that murder is justifiable. As mentioned before once the boundaries are crossed there is no going back. Golding offers another explanation to the reason for evils victory, "the darkness of man's heart" perhaps men are naturally evil. If one takes this mentality then in reality there is no struggle between good and evil; just resistance as evil dominates and men become moraleless creatures driven only by basic desire. Books like Lord of the Rings or Harry Potter portray evil as a different species, as men who are corrupted and not as Golding describes men in there natural and basic form. Lord of the Flies is perhaps the only novel which describes the battle between good and evil as the inner battle which every man must face. Simon was a visionary and his realisation is what Golding was trying to say, the "beast" they all feared was within them. In other words they feared each other and themselves but could not realise this. Golding presents the struggle between good and evil as a battle doomed from the start. He portrays men as naturally evil and only the few who cling to civilisation as good, but they are ultimately doomed as the three who do stay true to humanity are destroyed save Ralph who is rescued by luck. Lord of the Flies shows how without the fragile walls of society what human nature is truly like and why evil in the end will always be able to dominate good. By Rory Kinane ...read more.