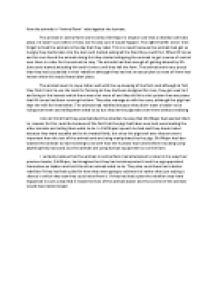 How the animals in Animal Farm rebel against the humans.

﻿How the animals in ?Animal Farm? rebel against the humans. The animals in animal farm were told by Old Major in chapter one that a rebellion will take place, he wasn?t sure when or how, but he was sure it would happen. The night that Mr Jones? men forget to feed the animals is the day that they rebel. This is a result because the animals had got so hungry they had broken into the barn and started eating all the food they could find. When Mr Jones and his men found the animals doing this they started whipping the animals to get a sense of control over them in order for the animals to stop. ...read more.

been designed for man, they get used to it and bring in the harvest which there was a lot more of and they did this a lot quicker than any years that Mr Jones had been running the farm. They also manage to milk the cows, although the pigs had kept the milk for themselves. The animals had rebelled because they didn?t want a leader to be ruling over them and telling them what to do but they let the pigs take over them without realising. I do not think that they accomplished the rebellion he way that Old Major had wanted them to, reasons for this could be because of the fact that the pigs had taken over and were leading the other animals and telling them what to do. ...read more.

I certainly believe that the animals in animal farm had attempted to rebel in the way their previous leader, Old Major, had imagined but they had misinterpreted it and the pigs appointed themselves as leaders and told the other animals what to do. They also could have had a better rebellion if they had had a plan for how they were going to achieve this rather than just seizing a chance in which they saw they could rebel from it. If they had had a plan the rebellion may have happened in such a way that it made the lives of the animals easier and the control of the animals would have lasted longer. ...read more.