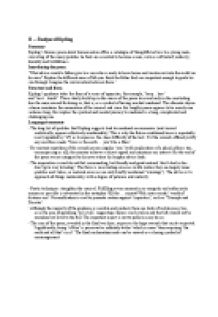 If by Rudyard Kipling analysis

﻿If ? Rudyard Kipling Summary Kipling?s famous poem about human nature offers a catalogue of thoughtful advice to a young male, consisting of the many qualities he feels are essential to become a man, such as self-belief, modesty, humility and truthfulness. Introducing the poem ?What advice would a father give to a son who is ready to leave home and venture out into the world on his own? Explore the different areas of life you think the father feels are important enough to guide his son through. Imagine the conversation between them.? Structure and form Kipling?s guidance takes the form of a series of opposites, for example, ?keep?lose? and ?trust?doubt?. ...read more.

Language/comments ? The long list of qualities that Kipling suggests lead to manhood are numerous (and viewed realistically, appear collectively unattainable). This is why the future conditional tense is repeatedly used (signalled by ?if?) as it expresses the sheer difficulty of the task. Yet the rewards offered justify any sacrifices made ?Yours is the earth ? you?ll be a Man?. ? By constant repetition of the second person singular ?you? (with implications of a plural address too, encompassing us all), the narrator achieves a direct appeal and maintains our interest. By the end of the poem we are intrigued to discover where his lengthy advice leads. ...read more.

Personification is used to promote caution against ?impostors?, such as ?Triumph and Disaster?. ? Although the majority of the guidance is sensible and prudent, there are hints of recklessness too, as in the area of gambling ?risk it all?, suggesting chances can be taken and that life should not be mundane but lived to the full. The important aspect is not to publicise any losses. ? The crux of the poem, revealed in the final two lines, expresses the huge rewards that can be expected. Significantly, being ?a Man? is perceived as infinitely better ?which is more? than acquiring ?the earth and all that?s in it?. The final exclamation mark can be viewed as a closing symbol of encouragement. ...read more.