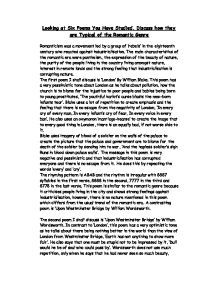 Looking at Six Poems You Have Studied, Discuss how they are Typical of the Romantic Genre

Looking at Six Poems You Have Studied, Discuss how they are Typical of the Romantic Genre Romanticism was a movement led by a group of 'rebels' in the eighteenth century who reacted against industrialisation. The main characteristics of the romantic era were pantheism, the expression of the beauty of nature, the purity of the people living in the country living amongst nature, interest in remote lands and the strong feeling that industrialisation is corrupting nature. The first poem I shall discuss is 'London' By William Blake. This poem has a very pessimistic tone about London as he talks about pollution, how the church is to blame for the injustice to poor people and babies being born to young prostitutes, 'The youthful harlot's curse blasts the new-born infants tear'. Blake uses a lot of repetition to create emphasis and the feeling that there is no escape from the negativity of London, 'In every cry of every man, In every infant's cry of fear, In every voice in every ban'. ...read more.

A contrasting poem is 'Upon Westminster Bridge by William Wordsworth. The second poem I shall discuss is 'Upon Westminster Bridge' by William Wordsworth. In contrast to 'London', this poem has a very optimistic tone as he talks about there being nothing better in the world than the view of London from Westminster Bridge, 'Earth has not anything to show more fair'. He also says that one must be stupid not to be impressed by it, 'Dull would he be of soul who could pass by'. Wordsworth does not use much repetition, only when he says that he had never seen so much beauty, 'Never did the sun more beautifully steep, Ne'er saw I, never felt a calm so deep!'. He uses personification to exaggerate how quiet the town is at that moment, 'The very houses seem asleep'. The message of this poem is quite positive compared to 'London'. Here, Wordsworth talks about how the countryside looks lovely in the fresh, clean air and how London and the countryside roll into one, 'Open unto the fields, and the sky, All bright and glittering in the smokeless air'. ...read more.

Wordsworth uses quite a lot of personification of the daffodils, 'Tossing their heads in a sprightly dance'. He also uses personification of his heart, in the last lines, to show what kind of feeling he experiences when thinking of these daffodils, 'And then my heart with pleasure fills, And dances with the daffodils'. He also alliteration in these lines to create emphasis and make it stick in the readers mind. It also sums the poem up. Wordsworth also uses repetition to make the poem flow and add emphasis to the lines and how he feels, 'I gazed and gazed - but little thought'. The rhyming scheme is ABABCC in all four stanzas and also has a constant rhythm of 8 syllables in every line of the poem. This poem is typical of the romantic era because the poet talks about nature and relates to the pantheism expressed in this time as Wordsworth talks about being close to the clouds which is thought of as being where heaven is 'I wandered lonely as a cloud'. The next poem I shall discuss is 'Spring' by Gerald Manley Hopkins. ...read more.