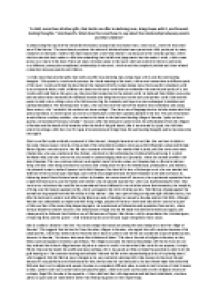 The Gift of Children in &quot;Silas Marner&quot;. What does the novel have to say about the relationship between parents and their children?

﻿?A child, more than all other gifts, that Earth can offer to declining man, brings hope with it, and forward-looking thoughts.? Wordsworth. What does the novel have to say about the relationship between parents and their children? In 1861 during the epoch of the Industrial Revolution, George Eliot (real name: Mary Anne Evans), wrote the renowned novel ?Silas Marner?. The novel deeply explores the nature of relationship between parent and child, portrayed by many characters in the book. I believe the main reason Eliot wrote ?Silas Marner? was because in the Victorian period, writers tried to entertain their readers whilst also embedding their beliefs and judgements into the reader?s mind, which comes across very clearly in the book. There are many Victorian values in the novel which are evident in the text, and some very different, some quite complicated, relationships in the novel, which reveal the complexity behind each inter-related connection between parents and children. ?A child, more than all other gifts, that Earth can offer to a declining man, brings hope with it, and forward-looking thoughts.? This quote by Wordsworth portrays the whole meaning of the book, with several connections to different parts of the novel. Wordsworth had the idea that at the moment of birth, human beings move from a perfect, idealised world to a corrupt and faulty world. Children are closest to this early world and can remember the serenity and purity of it, but Wordsworth said that as they grew up, they lose that connection to the natural world. He believed that children can evoke and reawaken these memories of childhood in adults and bring them closer to the early and perfect world. Eliot had this quote in mind when writing a story of a child resurrecting the humanity and hope in a man submerged in isolation and spiritual desolation. The ?declining man? is Silas, who was shown at the start of the book to be an ambitious and young linen weaver, who ?worked at his vocation in a stone cottage?. ...read more.

When he lifts the brick from the floor up and steals the money, he steps back out into the darkness, never to be seen again. Eliot?s style of writing in this fast paced chapter captures Dunstan?s inner voice, as his phrases, words and beliefs are embedded into the third person narration. Dunstan has this attitude that nothing matters as long as he?s happy and he doesn?t seem to care if anybody else gets hurt by his actions ? this is derived from his own father?s behaviour. Marner has this idea that as his life is so repetitive, nothing out of the ordinary could happen because of this daily cycle. However when he goes to count his money and finds it missing, his human form seems to die and he frantically panics. His only reassurance is his own reality, and so he reluctantly starts weaving monotonously once again. Marner is traumatised by his loss, as it is all he believed he had to live for and now that artificial and dormant hope had gone. He treated the loss of his gold like a person would treat the loss of their child ? he was deeply upset and became even more of a recluse. Silas is reduced to having to ask the villagers help catch the thief, which is a novel idea to him, however they soon sympathise with him and it creates community bonds as such. Later on, Dolly Winthrop introduces the idea of children as she ?stroked Aaron?s brown head, and thought it must do Master Marner good to see a ?pictur of a child. But Marner, on the other side of the hearth, saw the neat featured rosy face as a mere dim, round, with two dark spots in it.? This suggests that Dolly believes Aaron is an example of a picturesque child, but Silas simply sees an empty rosy cheeked face with dark eyes. ...read more.

Silas allows Eppie to speak for herself and choose who she wants to live with ? the choice between money, or human decency and relationships. This shows that Silas trusts Eppie will make the right decision with her life and what she feels is right, he places all his faith in Eppie to do the right thing. When Eppie chooses to stay with Silas in the ?idyllic and happy? cottage, far away from having to be a lady and wealth, the true colours of their relationship is shown. Eppie is Silas? salvation, and he learns to trust her with all his heart, and she later redeems him by him having faith in her. This is an example of a tight knitted and loving bond ? the relationship between Eppie and Silas is relentless to any outsider, and they both have this perfect trust and love in which they place in each other. This is very different to every other character in the book. For example, the relationship between Squire Cass and his sons is totally the opposite ? he believes money solves absolutely everything, and just as Godfrey copied, they both shirk their responsibilities which leads to devastating events. Molly Farran has no bond with her child at all ? she never paid her attention or love, which Silas redeems Eppie in a sense as he gives her what she had always lacked. In conclusion, I believe that children did bring some hope and forward looking thoughts to some of the characters in the novel, and to others they got what they deserved. The effect of Eppie on Silas? life is profound, she definitely brought forward looking thoughts, however, Dunstan and Godfrey certainly didn?t for their father because he simply had no interest in them. The sadness over the incapability of Nancy to conceive is weighed out by Godfrey?s actions, and so they didn?t deserve forward looking hopes from a child, which is exactly what they got. ...read more.