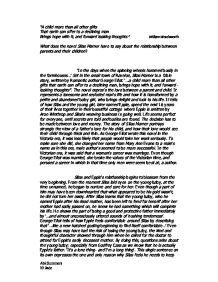 What does the novel Silas Marner have to say about the relationship between parents and their children?

You can tell this as previously in the story, when Dunstan stole Silas's money, the weather was raining and miserable, indicating something bad was happening. This also reflects Eliot's romantic tendencies as she uses natural images to reflect her characters and their emotions. When Eppie is older, and has learnt of how Silas is not her biological father, she still accepts him as if he was. Silas has continued to show his love for her with sayings such as "If you hadn't have been sent to save me, I should ha'gone to the grave in my misery". This would make Eppie feel the sense of love even though she isn't naturally his, and maybe the feeling of a hero as Silas may have not been there now if she hadn't of walked into his life. A powerful part of the story is when Godfrey tries to claim Eppie after 16 years of knowing she was his, which results in emotions being shown from Godfrey but mostly Silas. '...I'stead o' coming to take her from me now, when you might as well take the heart our o'my body?" This shows that Silas's love has grown strongly for Eppie over the last 16 years of their life and that she has basically became his heart and life, and that he wouldn't like her to be taken out of his life. ...read more.

Godfrey shows that he has now realised that he wants to look after Eppie and that he is ready to love her. This in some ways is selfish as she has grown up with a father figure, Silas, and Godfrey is now putting her on the spot to choose between love and money. You can understand why he is doing it for many reasons. One of which is for his beloved wife Nancy, but it isn't fair on Silas to do this as he has grown a strong bond with the young girl, and Godfrey shouldn't have the right to choose when he wants be a father and when he doesn't. "A child more than all other gift that earth can offer to a declining man Brings hope with it, and forward looking thoughts". After analysing the father and child relationships, I agree with this quote as Silas Marner shows how a small thing can change one person's life. No matter how that person happened to walk into their life, they can defiantly improve life and change it. The quote tells of how you should never left a young child go, as love grows over time, and for doing a good deed in the past, it shall bring hope and forward looking thoughts, resulting in an happier future. ?? ?? ?? ?? Abi Summers 10 Jade ...read more.